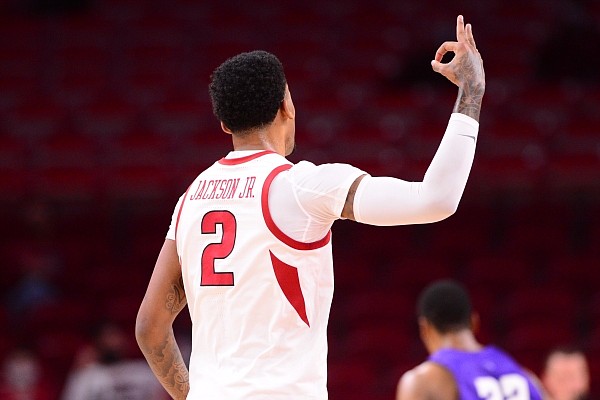 Arkansas forward Vance Jackson celebrates after making a 3-pointer during a game against Abilene Christian on Dec. 22, 2020, in Bud Walton Arena in Fayetteville.

The ninth in a nine-part series reviewing Arkansas basketball in 2020-21.

• Efficient from 3 on the right side of the floor. Some players can find comfort and a rhythm of sorts shooting the ball from certain areas of the floor, and I found this to be true with Vance Jackson on the perimeter. He gravitated a bit to the right side and had success. Despite his role fading in February and March, he finished third on the team in three-pointers made from the right wing and in the right corner. He was also second in triples from the top of the key with five on nine attempts.

For the season, he knocked down 10 of 20 threes from the right wing, including 2 of 3 in November, 4 of 5 in December and 3 of 8 in January. All of Jackson’s made threes from the right corner came at Tennessee on Jan. 6, and they helped the Razorbacks — without Justin Smith — have a shot to knock off the Vols in the game’s final minute. He had a clean look at a right-wing three late that would have been huge for Arkansas, but it rimmed out. I was perfectly fine with the shot. Jackson confidently pulled the trigger, it just didn’t fall for him. He finished 13 of 27 (48.1%) from three on the right side of the floor and 5 of 28 (17.9%) on the left.

He recorded a PAM — points above median, a calculation of how many additional points a player scores when compared with what an average player would have scored with those attempts — of 9.5 from three-point range, according to HoopLens analytics. That mark was second best on the team behind Moses Moody (15.4).

• Could be a help on the glass when locked in. Jackson’s best all-around performance of the season came at Tennessee when he scored 14 points and grabbed nine defensive rebounds. In that game he showcased that he could be a reliable rebounder when engaged. In his two seasons at New Mexico, Jackson ranked 7th and 12th in the Mountain West in defensive rebound rate, according to KenPom. In 2018-19, he grabbed 22.3% of available misses. He was more than capable of being a plus on the glass when he wanted to be. Rebounding is a want-to thing.

Jackson finished with three-plus defensive rebounds in eight games, including three times in SEC play — at Tennessee, at LSU, at Kentucky.

• Allowed Arkansas to play zone at times. The Razorbacks’ staff did their homework on Jackson prior to signing him last spring. In diving into his game, they knew he could assist Arkansas on the back line when it opted to throw a curveball at opponents and fall into a zone defense. He has good length at 6-9. Combine that with a bit of motivation from the staff to attack the glass and the Razorbacks could be effective in that defensive wrinkle for stretches.

• Untucked Vance. Kind of a fun, quirky observation. We did not catch many glimpses of Vegas Vance last season. However, Jackson did play with his jersey untucked from time to time, and I don’t have any numbers to back this up, but it did seem like he played well when it was.

• Did not display much game off the dribble. In watching Jackson’s highlight reels from his time at New Mexico, he appeared to be a player who was plenty comfortable handling the ball as a point-forward type, and he showed off an array of impressive moves off the bounce. Arkansas fans did not get to see much of that outside of the Tennessee game when he scored twice on All-SEC defender Yves Pons with nice up-and-under actions and a left-handed scoop shot.

I found him to be a bit stiff and upright when he did have the ball in his hands on the perimeter. He often caught beyond the arc, shot faked then jab stepped before giving the ball up to a teammate. When he did put the ball on the floor multiple times and worked into an isolation-type play it was kind of surprising. A majority of Jackson’s field goal attempts were catch-and-shoot tries.

• Inefficient inside the arc. In November and December, Jackson did not attempt many shots inside the arc, but it did not seem like he had much difficulty finishing close-in looks when he had them. He got 6 of 8 shots at the rim to fall in the first nine games of the season. When Arkansas dove into the first month of conference play, he began to struggle in the lane. He made only 1 of 9 attempts at the rim and was 3 of 11 on all shots in the painted area. He did not take a shot in the lane in the final two months of the season.

• Interior toughness. This is not to say Jackson can not be a tough and nasty player in the lane or inside the arc, because I believe part of the reason Eric Musselman and his staff wanted Jackson in the first place was they thought they could get that kind of play out of him. We did see that at times, but he did not contest or alter many shots on the interior or stand out in his ability to box out and secure rebounds in traffic. I remember clearly one instance in the SEC Tournament vs. Missouri when Jackson went up for a rebound around the rim and had the ball knocked free from his hands and out of bounds. As Jackson inbounded the ball, Musselman got on him to be stronger on the glass.

Jackson blocked two shots last season, both against Abilene Christian. I thought he had a tendency to swipe at the ball on the interior rather than play the shot, and it led to some cheap fouls. Through six games, he allowed opponents to hit 5 of 9 two-point attempts when he was the nearest defender, and from Jan. 6 to March 6 opponents were 12 of 21 inside the arc against him. He limited opponents, though, to 1 of 12 from three-point range in that span. The lone three came at South Carolina.

Best Jackson quote: ”I've just got to be consistent in their eyes, have a positive mindset. I know I haven't been playing that much, even though I feel like I should've been playing, but I just don't let that get to me.” — Jackson following the loss at Tennessee

Best quote on Jackson: “His struggles at times have been on the defensive side, and he’s really worked hard to do what we want from a technique standpoint from lowering his hips. He was hungry for his minutes. And again, I thought he did a great job. That’s one of the reasons that we recruited him. When we played against him we saw a lot of good things he did.” — Eric Musselman on Jackson after a 14-point, 9-rebound game at Tennessee