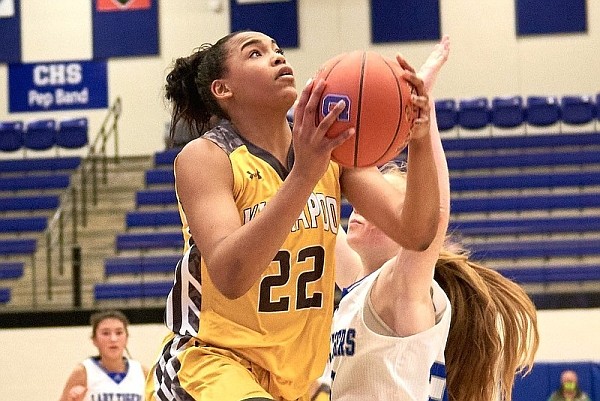 Dungee was the No. 5 pick of the Dallas Wings, and Slocum was the 14th overall selection to the Las Vegas Aces.

ESPN 5-star junior guard Ysabella Fontleroy, junior forward Kharyssa Richardson and sophomore guard Maraja Pass hope to have their names called in the WNBA Draft in the future. Neighbors is hoping that happens after they complete their college careers in Fayetteville.

“I am super proud of them,” Richardson said. “I knew they were both going to make it big time because their work ethic is unmatched. They both were coached under a great coach. I hope they continue to be great and continue to put work in because it’s only up from here.”

Richardson, 6-2, of Douglasville (Ga.) New Manchester, has about 15 scholarship offers from schools such as Arkansas, TCU, Pittsburgh, Wake Forest, Colorado and others. Having two early draftees helps Arkansas in its efforts to land her.

“I’ve watched Chelsea for several years now and it’s been really fun to watch her growth and development as a player, and she’s just getting started,” Fontleroy said. “This is a great step for her and I’m really excited to see what she does in her WNBA career.

"The same goes for Destiny. They both are extremely talented players with high IQs and will be able to impact the teams they are a part of and make them better. Very excited for the both of them.”

ESPN also rates Fontleroy the No. 2 wing and No. 12 overall prospect in the 2022 class.

“One of the things that makes Arkansas so appealing is their coaching staff,” Fontleroy said. “Whenever you have a staff of that caliber with players to match, greatness is bound to happen.”

Pass, 5-5, of Shelby, N.C., has offers from Arkansas and Catawba College while Vanderbilt, UNC Charlotte, Arkansas State and Columbia have shown interest.

"I think that Arkansas women’s basketball is a great program and they have a great coaching staff," Pass said. "I’m sure Dungee and Slocum have worked very hard and are very deserving of their great accomplishments and I wish them the best of luck on their new journey.

"They’ve been fun to watch this past season and I look forward to watching them in the WNBA."