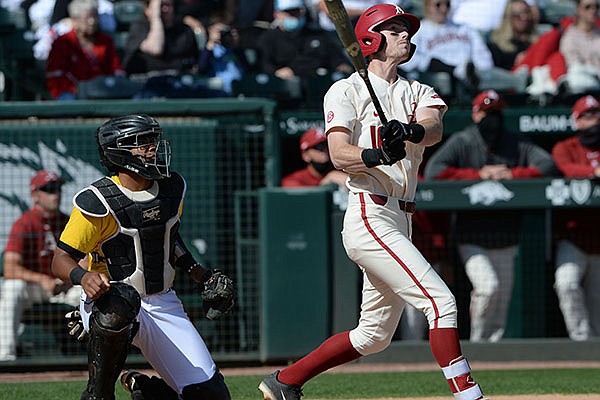 Arkansas' Matt Goodheart hits a home run during a game against Arkansas-Pine Bluff on Wednesday, April 14, 2021, in Fayetteville.

Goodheart went 4 for 4 with a grand slam and two of the No. 1 Razorbacks’ eight home runs in a 26-1 run-rule rout of the University of Arkansas-Pine Bluff before a crowd of 3,655 at Baum-Walker Stadium.

The Razorbacks (28-5) wound up one home run shy of the school record while extending their NCAA lead to 63 home runs.

Goodheart wasn’t the only two-home run Hog, as Brady Slavens, Cullen Smith and Charlie Welch each launched two with a crosswind blowing from left to right.

The Golden Lions (2-21) managed seven hits but could push across only one run. Nick Kreutzer delivered a sacrifice fly in the third inning to score Karsten Vasquez, who had singled against Elijah Trest and advanced to third on a Goodheart error.

Goodheart led off the bottom of the first with a home run off Trenton Ferguson (0-1) that went over the Hunt Baseball Development Center, traveling an estimated 450 feet. It was the first earned run Ferguson has allowed this season.

“I was looking on 3-1 just for something straight, and it ended up being a fastball more middle in and I just worked to stay behind it and drive it,” Goodheart said. “I wasn’t sure where it landed, but I know we’ve got some left-handed hitters that have some pop that hit with authority.

“I’m not really sure if I was the first [to clear the Hunt Center] or what, but Slavens and those guys, it’s not uncommon for them to hit it up there in BP or anything like that.”

“The one Goodheart led the game off with, it left the bat at 110 mph and it landed probably over the building completely,” Van Horn said. “That ball was hammered. We hit some balls extremely hard. Charlie hit some balls hard to the pull side to left field.

“We just did a good job. We had to adjust to the pitching a little bit. It took us yesterday, and today we got it going pretty good.”

Arkansas scored in all but the fourth and sixth innings and put up an 11-spot in the fifth as UAPB Coach Carlos James went with short stints by mostly relievers to prepare for a weekend series against Texas Southern at the Torii Hunter Baseball Complex in Pine Bluff.

Goodheart had hit leadoff earlier in his career.

“I like leading off,” he said. “I’ve done it a lot in my past. Pretty much my whole life until I got to my senior year in high school.”

Franklin walked after Goodheart’s leadoff home run, and Slavens followed with a two-run shot to make it 3-0 before the Golden Lions could post an out.

Van Horn used several players at nonregular positions, such as Smith at second base and Jacob Nesbit at shortstop. He also substituted liberally, pulling starters Christian Franklin and Slavens after a few innings. Pitcher Nate Wohlgemuth got a turn at the plate, and pitcher Heston Tole was used as a pinch runner and scored a run.

One of the results of the lineup changes was the Razorbacks were a little disjointed on defense, committing a season-high four errors — two by Goodheart, one by Smith and one by Dylan Leach in right field.

Slavens joined Goodheart with a game-high 5 RBI, while Welch went 2 for 4, drove in 4 and scored 4 runs.