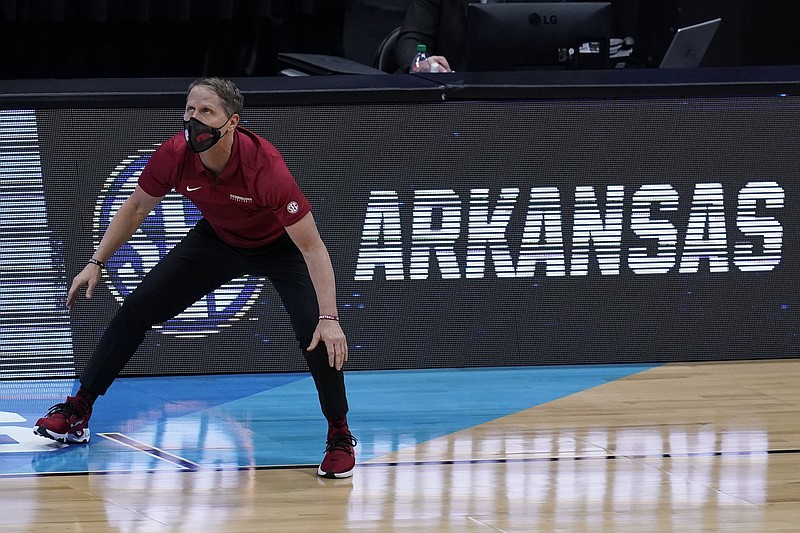 Arkansas head coach Eric Musselman watches from the sideline during the second half of an Elite 8 game against Baylor in the NCAA men's college basketball tournament at Lucas Oil Stadium, Monday, March 29, 2021, in Indianapolis. (AP Photo/Michael Conroy)

Everyone knew Arkansas Coach Eric Musselman had earned a raise.

In his second year as the basketball head Hog, he took the Razorbacks to the Elite Eight, where it gave eventual champion Baylor its toughest game of the NCAA Tournament.

Athletic Director Hunter Yurachek didn’t shy away, saying during the tournament that a contract extension would be discussed as soon an Musselman got out of the Indianapolis bubble.

An agreement has been reached.

Late Monday night, Yurachek tweeted out a picture of himself and his wife Jennifer toasting with Musselman and his wife Danyelle. The tweet said, “Sleep well Arkansas @RazorbackMBB is in good hands.”

The University of Arkansas announced Wednesday afternoon a new contract was a done deal and gave a few of the details.

Most of the media already had put in a Freedom of Information Act request. While it wasn’t needed in this instance, it is a much-needed act that people need to leave alone.

Anyway, Musselman’s new salary, starting May 1, will be $4 million per year for the next five years. There are incentives as well.

My first guess was he’d get another million a year and double the amount of his incentives.

Certainly after two years and a 45-19 record, including 25-7 this season, he didn’t deserve to be the 13th-highest paid coach in the SEC. Vanderbilt is a private school and doesn’t release salaries, so he might have been last.

Calls from around the country started coming in, even before the NCAA Tournament. Then Arizona finally fired Sean Miller, and Musselman was on the Wildcats’ short list. That was from NBA sources.

Yurachek wasn’t concerned about a bidding war (Arizona was paying Miller about $2.5 million). His biggest concern was keeping the winning attitude and fan excitement intact.

He probably knew from the get-go that $4 million a year, plus some incentives, would keep Musselman.

Most likely, Yurachek studied the coaches’ salaries in the SEC and nationally. They are published each year by USA Today.

In these economic times, he knew he couldn’t approach what Kentucky is paying John Calipari, who has been with the Wildcats 12 years and has a record of 339-93 (.785), including a national championship in 2012. He is the highest paid coach in America at more than $8 million a year.

Yet, Yurachek knew he had a coach better than 49th-highest paid in the country.

The AD knew he got a bargain two years ago, but he also hired Musselman with full expectations that his stock would rise, and probably quickly.

Musselman is proving to be a master at using the transfer portal and recruiting guys he can blend into a team.

If the Razorbacks are going to compete in caliber of coaching with a Tennessee or Texas A&M, that’s the type money they need to pay.

Our man Bob Holt had the $4 million figure in Wednesday’s paper.

That seems like a logical number, although the internet lit up with bold statements of $5 million a year for seven years.

That would have been doubling his pay, something schools just don’t do.

If $4 million a year keeps the Muss Bus parked at Walton Arena, then that seems like a fair market price and would bump the Arkansas job into top-12 compensation, and hasn’t it returned to being a top-12 job under Musselman?

A 60% raise is very healthy, but for the future of the Razorbacks basketball program it was probably what Yurachek needed to do.

Judging by Yurachek’s tweet, everyone is happy and ready to get back to basketball.