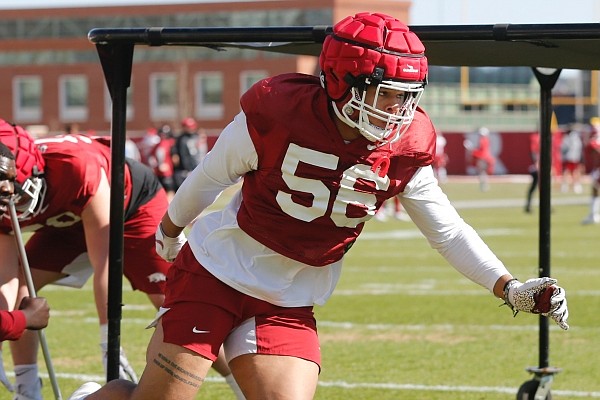 Zach Williams (56) participates in an agility drill during practice Thursday, April 1, 2021, in Fayetteville. Check out nwaonline.com/210402Daily/ and nwadg.com/photos for a photo gallery.

FAYETTEVILLE — A pair of former Arkansas high school standouts have made strides toward creating larger and more secure roles for themselves in 2021.

Zach Williams (Joe T. Robinson) and Jashaud Stewart (Jonesboro) are fighting this spring to become mainstays along Arkansas’ defensive line this fall. They have caught the attention of Razorbacks coach Sam Pittman in the process.

A sophomore last season, Williams gained valuable experience as he played in nine of 10 games. He earned four starts, including three in a row against Mississippi State, Auburn and Ole Miss. His play led many to believe he could be a major factor in the future.

For Stewart, he saw the field in eight games in 2020, but did not record any statistics. Based on what the second-year head coach has seen through 14 practices, he expects Stewart’s name to echo in stadiums in the fall, especially if the 6-2 defensive end adds 10-12 pounds to his frame.

“He plays with a tremendous amount of energy, he chases the ball, and you’re going to get him every snap,” Pittman said Wednesday. “Whatever he’s got in there, that’s what you’re going to get every snap. And I don’t believe you have to be a senior to lead. I think you’ve got to beat somebody out then you become a leader, and that’s what he’s done.

“He’s moved up the depth chart and he’s made guys that are ahead of him and behind him play harder. The bottom line is he’s relentless with his effort and he’s going to make a lot of plays. He’s not the biggest, not all of those things, but he is one hard-working, hard-playing guy.”

Pittman added that Stewart, for an undisclosed reason, is questionable for Saturday’s spring game. Two weeks ago, Stewart drew praise for his performance in the team’s second scrimmage.

Receiving reps with the first-team defense, he recovered a fumble in the backfield and was in on a number of plays on account of his motor and physicality.

“What he teaches is like in any business: If you work hard and you come to work every day with that lunch pail attitude — that’s what he had in high school, too — that you can move up in your business,” Pittman said. “You can move up on the football field or whatever it may be.

“He plays extremely hard and we wanted to reward that as well.”

Isaiah Nichols, a candidate to start at defensive tackle, noted that Stewart’s work ethic stands out.

“You notice him on the field,” Nichols said. “You see how fast he plays and how explosive he is off the ball. We’ve been trying to talk about working hands. He has a lot of potential. I’m excited to see how he develops over the years.”

A solid contributor last season who finished with 22 tackles, including 13 in the Razorbacks’ first two games against Georgia and Mississippi State, Williams looks more like an SEC defensive end physically this spring. Listed at 246 pounds in 2020, he is now up to 264.

By the start of next season, he hopes to have added 10 more pounds. Williams is handling the extra weight well to this point.

“I don’t even feel a difference,” he said. “I still feel like I’m 200 pounds, (like) before I first got here....I’m a lot more confident. I was always the underweight one, but I’m finally starting to pick up my weight and get stronger, and I can actually throw people around if I need to.

“I feel like I’m just stacking it together and coming up with my own technique myself, and I just feel more comfortable with that. You can always get better, (and) I feel like I’m getting better.”

In addition to his weight, Williams believes he has made his biggest gains in his ability to get to the quarterback. A bull rusher much of last season, he is growing more effective using his hands to fight off offensive tackles.

Williams wants to be consistent in his productivity, too. His 1.5 tackles for loss and lone sack came in the season opener. He totaled three tackles in his final five games.

“Individually, I want to make a statement about how much better I’ve gotten from last year,” said Williams, looking ahead to the spring game. “I want to show people that I’ve actually gained weight and I’m starting to get better with my technique.”