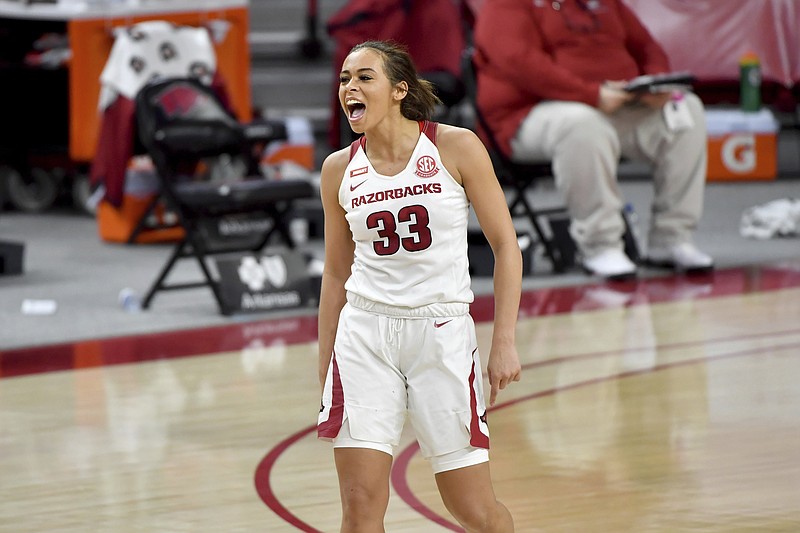 Arkansas guard Chelsea Dungee celebrates after hitting a shot against Connecticut during the second half of an NCAA college basketball game Thursday, Jan. 28, 2021, in Fayetteville, Ark. (AP Photo/Michael Woods)

Chelsea Dungee and Destiny Slocum created a dynamic duo for the University of Arkansas this season, but they could become adversaries in the pro ranks.

Dungee was selected fifth in the first round by Dallas, while Slocum was the 14th pick overall by Las Vegas in the WNBA Draft on Thursday evening.

Dungee was elated to hear her name.

“I feel on top of the world right now,” Dungee said on a Zoom call with media. “I feel amazing. I worked my whole entire life for this moment, for this day, for this feeling.”

Dungee and Slocum helped the Razorbacks to a 19-9 finish and Arkansas’ first NCAA Tournament berth since 2015. They ranked 1-2 in scoring for Arkansas, and both earned All-SEC honors.

Dungee was expected to be chosen in the first 10 picks, according to several mock drafts. A couple had the Wings taking her with the seventh pick, but they traded that pick on Wednesday, thus pulling the trigger a little bit faster.

Dungee led the SEC in scoring, averaging 22.3 points per game. She scored 2,147 points in her collegiate career — the most ever by an Arkansas player. The 5-11 guard, who transferred to Arkansas after her freshman year at the University of Oklahoma, became the first Razorback to earn All-American honors since Shameka Christon in 2004. She was selected an All-American by The Associated Press and Women’s Basketball Coaches Association.

Slocum, a graduate transfer, became the first Arkansas player to have 20 points and 10 assists in a game this season since Kimberly Wilson in 1996. She went in exactly the spot predicted by ESPN’s mock draft with the second pick of the second round.

Playing in Mike Neighbors’ fast-paced system should help her transition quickly to the WNBA, Dungee said.

“I think I have the ability to score the basketball from everywhere on the floor. I can shoot the three consistently. You’ll see more of my mid-range game. I’ve always had it, but I didn’t get to showcase it as much in college … getting to the basket, getting fouls, getting under the defense.”

Neighbors, who was alongside Dungee and her family Thursday evening, said seeing his players’ raw emotion hearing their names called in the draft is special.

“To be able to see Chelsea’s excitement live and Destiny’s on TV, that’s one the many whys we coach for days like today,” said Neighbors, who has now had six former players drafted in the WNBA. “Just to see that buildup and the excitement and for the people who have been there for her whole entire life, genuine joy. You could just see it in their reaction.”

Dungee also will get to play alongside another dynamic scorer in Arike Ogunbowale, who led the league in scoring last year.

“I love watching Arike play,” Dungee said. “She plays with so much passion, energy, intensity … I can learn so much from her and I can’t wait.”

She’s also happy that Dallas isn’t too far of a drive for friends and family either.

“I’ve had so much support since the day I stepped on this campus until now and I know that will carry on through the WNBA,” Dungee said. “It means so much to me. My mom’s never missed a home game. I’m only about three and a half hours from her and about five from Arkansas, so it couldn’t be a better situation.”

Slocum will also see a familiar face with the Aces in Kelsey Plum. The former University of Washington standout spent this season as a graduate assistant for Neighbors. Chicago Sky General Manager and Coach James Wade said prior to the draft that Slocum’s time with Plum was a definite plus.

The Aces have a number of high salary players, which could give Slocum a better shot to make the roster, Neighbors said.

The WNBA has 12 teams, but every one won’t carry 12 players because of salary cap and other issues.

Neighbors has proof how his system translates to the professional level with two players drafted in the top 14.

“Letting them grow their game and play to their strengths, I do think that translates,” Neighbors said. “We’ve got a few kids now that have made that transition and I hope it becomes a staple that those people can look at what we do and know they’re going to be as ready as they can be.”