Iso Joe not ready to hang sneakers at Hall of Fame 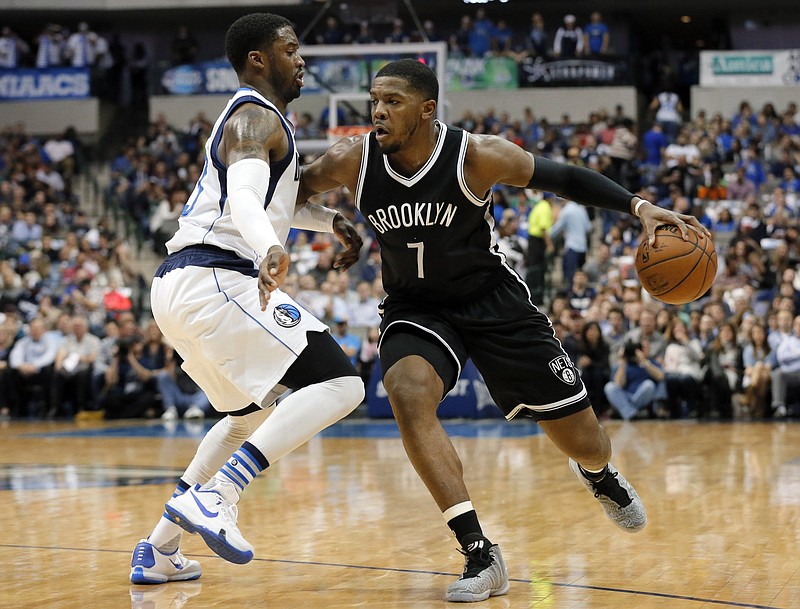 At 39 years old, Joe Johnson might not have played his last NBA game.

The Milwaukee Bucks plan to work out Johnson, the website HoopsHype reported, to determine if the team wants to have him fill its currently open roster spot.

“Joe should be with an NBA team,” said Darrell Walker, a long-time NBA player and coach who is now coaching the University of Arkansas at Little Rock. “He’s still skilled enough to play 15, 16 minutes a game for anybody.

Walker was talking about the Naismith Hall of Fame — the pinnacle for any basketball coach or player — but tonight Johnson will be inducted into the Arkansas Sports Hall of Fame in his hometown of Little Rock.

Johnson At a Glance

“I fell in love with the game when I was 6 or 7 years old, playing at the Thrasher Boys and Girls Club in Little Rock,” Johnson said last summer.

Johnson went on to star at Little Rock Central High School and played two seasons at the University of Arkansas before entering the 2001 NBA Draft. The Boston Celtics drafted the 6-7 Johnson with the 10th overall pick.

“I’m so proud and so happy for all the accomplishments that Joe has been able to reach,” said Nolan Richardson, who coached Johnson at Arkansas. “I remember when he was a young boy, 13 or 14 years old, and I first saw him when he came to my basketball camps.

“Now to know that he’s a Hall of Famer for the state of Arkansas, it’s so great to see.”

Richardson, an Arkansas Sports Hall of Fame member inducted into the Naismith Hall of Fame in 2014, said Johnson should join him in that honor as well.

“Joe is heading to the Naismith Hall of Fame,” Richardson said. “He’s got the credentials. He’s had a phenomenal career.”

Johnson hasn’t played in the NBA since the 2017-18 season, when he appeared in 36 regular-season and eight playoff games for Houston. In September of 2019 the Detroit Pistons signed Johnson, but he was released before the season.

But Johnson has continued to play basketball.

In February, Johnson played for Team USA in the FIBA AmeriCup Qualifying Tournament in Puerto Rico. In two games, he averaged 11.0 points and team-highs of 9.0 rebounds, 6.5 assists and 26.0 minutes to help Team USA beat the Bahamas 93-77 and Mexico 95-76.

“I think it is more gratifying at this stage and point in my life,” Johnson told Steve Drumwright in an article that appeared on USA Basketball’s website. “I’ve been out of professional basketball for over a year now, but I keep myself in great shape.

“I’m in the gym every day, and I train like a pro. When [USA Basketball] called and I got this opportunity, there was no way I would turn it down.”

Prior to Johnson’s second stint with Team USA — his first time was in 2006 — he played in The Basketball Tournament (TBT) for Overseas Elite last summer and played in the BIG3 3-on-3 League in 2019 and led his team, the Triplets, to the championship and earned MVP honors.

“You get one body, and you’ve got to take care of it,” Johnson said last summer. “That’s your temple.

“Right now I’m in some of the best shape I’ve ever been in. I watch what I eat. I do a lot of hot yoga, which is so detoxifying for your body, so good for your muscles and joints and bones.

“I know I can’t give that up, and that’s definitely what’s helped keep me going over the years. Especially these later years.”

Walker said he saw Johnson working out at a gym in Little Rock about a month ago.

“Joe is in great shape,” Walker said. “He works on his body all the time. That’s why he’s never really had any major injuries.

“Hopefully the Milwaukee Bucks do pick him up. That would be great.”

Former Razorback Ronnie Brewer played in the NBA from the 2006-07 through the 2013-14 seasons and guarded Johnson in his prime.

“The reason Joe was so good offensively was his versatility,” Brewer said. “He could shoot the ball from the three-point line. He could shot fake and hit pull-ups. His dribble drive was great. When you fouled him, he knocked down his free throws.

“With his size, he could back down and post up most everybody and shoot over the top of them. That’s what got him that nickname ‘Iso Joe.’

“He had so many mismatches he could create. He was bigger than guards who tried to cover him, and if you put bigger guys on him, he was quick enough to get around them.

“He could handle the ball really well, he could facilitate for others. He was so clutch in those big moments when his team needed him to hit a shot.

“Joe really had no flaws in his game.”

Johnson averaged 15.0 points, 6.1 rebounds and 2.4 assists in two seasons at Arkansas. He led the Razorbacks to two NCAA Tournament appearances and their only SEC Tournament championship in 2000 as a freshman.

“Joe was the name of the game for us,” Richardson said. “A lot of people are rated on how good they are, but Joe made other guys around him better as well. When you’ve got a guy like that, it makes him a totally different ballplayer.

“Even though Joe’s individual acts are what people remember — how he scored and the big shots he hit — how about all the times that he set up other guys that gave us opportunities to win games?

“Joe was one of the best passers I ever coached. He could shoot the ball, but he could create for others, too. He’d take off and the defense would have to converge on him, and then he’d get the ball to a wide-open teammate.

“That’s what makes a player great, when he makes others around him better. That’s what Joe always has done.”

Brewer said he was impressed watching video of Johnson playing for Team USA.

“It’s a true testament to Joe’s hard work and dedication to still be in great shape and on top of his game at age 39,” Brewer said. “It shows so much about his work ethic and knowing what it takes to be a true professional and continue to work at your craft.

“Most people at that age, their body is breaking down and they’re injury-prone. But you still see Joe going extremely hard and having something left in the tank.

“His love for the game shows, because he still wants to play to this day.”