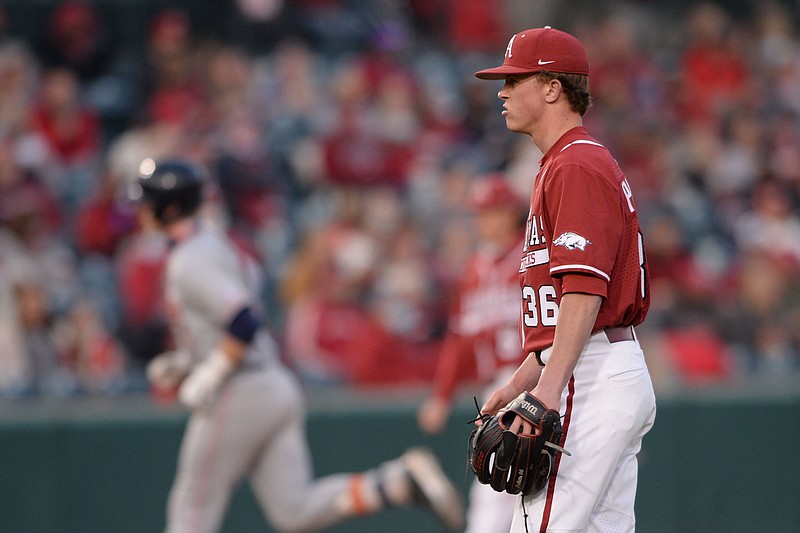 Robert Moore leads off the 10th with a single to the Bermuda Triangle between the right fielder, left fielder and shortstop.

Goodheart singles to left and the Hogs have two aboard with nobody out.

Wallace grounds to the shortstop who flips to second for the first out, but the throw is spiked into the ground and gets by the first baseman. Moore comes around from third to score and the Hogs win.

Kopps gets two strikeouts and a groundout to Battles at short to end the inning.

Kopps found his groove in that inning. Top of the order due up for the Hogs.

Opitz pops up down the right field line for the first out.

Braydon Webb, who pinch hits for Zack Gregory, wears a 2-2 pitch to put the winning run on base.

On a pitch in the dirt Webb takes off and is safe by a step.

Battles tries to hold up on a 2-2 pitch that breaks and hits his back foot, but the umpire says he went around and he is called out on strikes.

Nesbit flies out to right to end the inning and send this one to extras.

Kopps walks the leadoff batter, but is able to work around it.

The next batter hits a swinging bunt to the third base side of the pitcher's mound. Kopps fielded the ball and threw out the batter.

Then he got back-to-back flyouts to right to end the inning.

Goodheart starts off the inning for the Razorbacks by striking out.

Britt, the A&M right fielder, just made a feet first sliding grab to end retire Wallace. Slavens hits a hot-shot ground ball just under the glove of the second baseman for a hit.

Franklin strikes out looking to send us to the 9th.

Kopps strikes out the first batter he faces.

Then A&M gets the next two batters aboard with a walk and a single to center.

Kopps draws up just what the doctor ordered as he gets a 6-4-3 double play to end the inning.

Huge play to end the inning and get the Razorbacks out of the jam.

Here is the double play ball:

A beauty of a double play sends us to the bottom of the eighth.

Chandler Jozwiak will come in to pitch for A&M.

Battles starts the inning with a looping single to center field.

Jacob Nesbit squares to bunt, but can't get it down. He then works the count to 3-2 before striking out swinging on a fastball.

Robert Moore grounds up the middle. The shortstop field touches second and then throws to first for the double play.

Kevin Kopps is in to pitch the 7th.

Minnich gets an 0-2 hanging breaking ball into the scoreboard to tie the game.

Kopps responds by getting a groundout and two strikeouts to end the inning. His cutter looks good as always.

Slavens grounds out to second to start the inning.

Franklin is hit. He then steals second on a very close play.

Opitz chases high and away to strikeout for the second out.

Gregory strikes out looking, the 10th Razorback strikeout this game, to end the inning.

Pallette gets a strikeout and a lineout to start the inning.

Two-hole hitter Frizzell hits a double down the right field line, that gives the Aggies their first runner in scoring position.

After a mound visit from Hobbs, Pallette gets a pop up foul to Opitz behind the plate to end the inning.

Battles leads off the inning with a walk. Nesbit sacrifices him over to second.

Robert Moore looks at a fastball that he thought was in, but it's a called strike three.

Goodheart works the count to 3-1 and A&M elects to intentionally walk him.

Wallace hits a drive to straight away center field, but the center fielder Alejo catches the ball at the wall to end the inning.

The Aggies get an infield single, but that's it.

Pallette adds another strikeout to his total, that's six for him today.

Cayden Wallace leads off the inning with a single to center. He went down and got a breaking ball that was low in the zone.

Slavens hits a line drive up the middle, but the Aggies had the shift on. The shortstop steps on second and then throws to first for the double play.

Franklin follows with a walk and Opitz works one as well.

Runners on 1st and 2nd for Gregory, but he pops up to the third baseman in foul territory to end the inning.

For the third time in four chances Pallette retires the A&M side in order.

This time he gets a strikeout, a pop out in foul territory and a groundout to second to end the inning.

Miller strikes out two more Razorbacks, his sixth and seventh strikeouts of the game, to retire the Razorbacks in order. Robert Moore hit a slow dribbler to third, but the third baseman Schmidt made a great play to barehand and throw Moore out at first.

Pallette adds two more strikeouts to bring his total to four. A&M does get a hit, their first of the game, but Pallette leaves him stranded on first.

WholeHog went to the bullpen. Seth will be taking over the live updates from Dudley. Appreciate Dudley helping out for the first game and some of this one.

A&M doesn't need to go the bullpen as Bryce Miller strikes out the side, retiring all three batters he faced.

Peytom Pallette zips through the second inning in 1-2-3 fashion.

Matt Goodheart unloads on his 10th honer of the season, a one-out solo shot on the first pitch he sees from Texas A&M starting pitcher Bryce Miller.

Miller had allowed only one homer this season, but Goodheart tagged him with the Razorbacks' nation-leading 67th blast and his fourth in the last three games.

Goodheart's homer ties him with Brady Slavens for the team lead.

After taking game one 13-0, Arkansas will go four with the doubleheader sweep of Texas A&M by sending Peyton Pallette (1-2, 4.83) to the the mound.

Pallette is making his seventh start of the season and his ninth appearance.