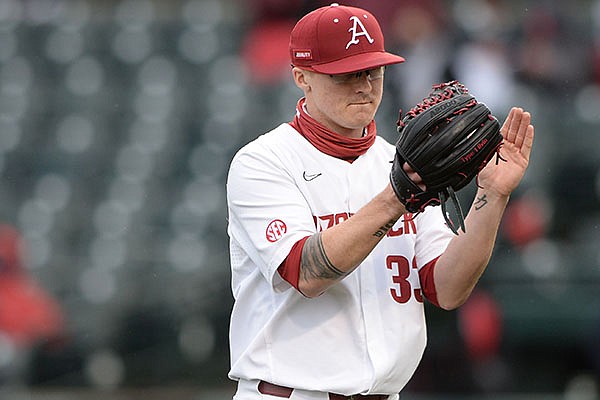 Arkansas reliever Patrick Wicklander celebrates Friday, March 5, 2021, after recording the third out of the top of the sixth inning of the Razorbacks' 7-6 win over Murray State in Baum-Walker Stadium in Fayetteville.

Arkansas pitchers Patrick Wicklander and Caden Monke combined to pitch eight innings of two-hit baseball, and the No. 1 Razorbacks scored early and often in a 13-0 victory over Texas A&M in the opening game of a Saturday doubleheader.

Brady Slavens and Cayden Wallace both went 3 for 4 and combined for 6 RBI for Arkansas (29-5, 10-3 SEC). The Razorbacks had 13 hits, including home runs from Slavens, Matt Goodheart and Robert Moore.

Wicklander started and allowed 1 hit and fanned 7 in 4 2/3 innings. At one point he retired 13 in a row.

Monke came on to escape a bases-loaded situation in the fifth. He struck out five in 2 2/3 innings and earned the win.

Slavens doubled home a pair of runs in the first inning and he and Goodheart both homered in the second inning to push the lead to 5-0.

Cullen Smith’s sacrifice fly plated another run in the fifth before Wallace’s bases-loaded double and an error pushed it to 9-0 in the sixth.

Jalen Battles had a run-scoring single and Robert Moore hit a two-run homer in the seventh as the lead grew to 12-0.

The teams are scheduled to play again at 5 p.m.

Arkansas pitchers Patrick Wicklander and Caden Monke combined to pitch eight innings of two-hit, shutout baseball and the No. 1 Razorbacks scored early and often in a 13-0 win over Texas A&M in the opening game of a Saturday doubleheader.

Brady Slavens and Cayden Wallace both went 3-of-4 and combined for six RBIs for Arkansas, who had 13 hits with homers from Slavens, Matt Goodheart and Robert Moore.

Cayden Wallace and Brady Slavens both singled and Wallace came home on Christian Franklin's sacrifice fly for the 13th run of the the day.

Monke issued a walk and allowed a hit in the 8th, but escaped unscathed.

Cullen Smith walked, moved up on a Casey Opitz grounder and scored on Jalen Battles' single. Battles then trotted home when Robert Moore launched his first homer in SEC action and the Razorbacks' third of the day.

Caden Monke continues to roll. He has fanned five of the seven batters he has faced in 2 1/3 innings.

Texas A&M brings in Chris Weber to replace Dustin Saenz on the mound. Zack Gregory reaches on a one-out bunt and Braydon Webb comes in as a pinch runner. Robert Moore singles Webb to second and is Arkansas' eighth hit of the game.

Matt Goodheart walks to load the bases before Cayden Wallace's clears the bases with three-run double down the right field line with the last run scoring because of an error on the play.

Weber calls a timeout and retires both Brady Slavens and Christian Franklin to end the inning.

Caden Monke fans Ray Alejo, gets Will Frizzell to fly out and fans Austin Bost.

Logan Sartori breaks up Patrick Wicklander's no-hitter with a one-out double and Trevor Werner walked. The two runners moved up on a wild pitch. Both runners stayed put on Mikey Hoehner's ground out to third, but Kalae Harrison's walk loaded the bases and ended the day for Wicklander.

Caden Monke replaces Wicklander on the mound and fans Byrce Blaum to leave the based loaded and end the threat.

Zack Gregory delivered a one-out single, but Dustin Saenz pitched a second consecutive scoreless inning with the bullpen showing activity. Saenz has thrown 87 pitches, almost twice as many as his mound foe.

Patrick Wicklander continues to fire strikes and has his third 1-2-3 inning of the game. He needs just seven pitches in the fourth and has tossed just 44 pitches through four innings. He has fanned six and tossed 36 strikes.

Texas A&M pitcher Dustin Saenz has both his first 1-2-3 inning and his first scoreless frame of the day.

Saenz has allowed five runs on five hits, walked three and fanned one. He has 44 strikes among his 71 pitches tossed in three inningd.

It's 3-up, 3-down for Patrick Wicklander in the third. He has retired eight batters in row, fanned four allowed no hits or runs and has not issued any free passes. He had thrown just 37 pitches so far with 29 of those being strikes.

Dustin Saenz retired Zack Gregory and Robert Moore, but then Matt Goodheart touched off his ninth homer of the season and fourth in SEC action.

Cayden Wallace followed with a single and then Brady Slavens slammed his 10th homer run of the season to make it 5-0.

Slavens' homer was his team-leading 10th and the 65th of the season for the Razorbacks, who lead college baseball with 65. Slavens has four RBIs in the first two innings of today' opener.

Patick Wicklander fans the side and now has four whiffs in two innings. He needed just 11 pitches to do so and has thrown only 25 so far with 20 of those being strikes.

After getting ahead 0-2, Saenz walked Robert Moore om a 3-2 pitch and then gave up a Matt Goodheart single and walked Cayden Wallace to load the bases with nobody out.

Brady Slavens doubled a pair home, but Wallace ran threw a stop sign at third and was tagged out at the plate.

Slavens now has an SEC-leading 42 RBIs.

Saenz got Christian Franklin to groundout, but Cullen Smith reached on an error as Wallace moved to third with two outs.

Casey Opitz walked to reload the bases and bring Jalen Battle to the dish.

Battles flew out to center to leave it 2-0.

Arkansas forced Saenz to throw 33 pitches in the opening frame.

Wicklander retired lead off hitter Bryce Blaum before hitting Ray Alejo. He bounced back by whiffing Will Frizzell and getting Austin Bost to ground into a fielder's choice.

Arkansas enters the weekend with the best record in the SEC West. Texas A&M is sixth in the division.

The Aggies defeated Texas State 8-4 on Tuesday to snap a six-game losing streak. Texas A&M has lost five consecutive conference games, including two games at Missouri and three games at home against Alabama.

Arkansas has won five of seven series against Texas A&M since the Aggies joined the SEC for the 2013 season.

Arkansas leads the NCAA with 63 home runs. The Razorbacks hit eight home runs during a 26-1 victory in seven innings over Arkansas-Pine Bluff on Wednesday