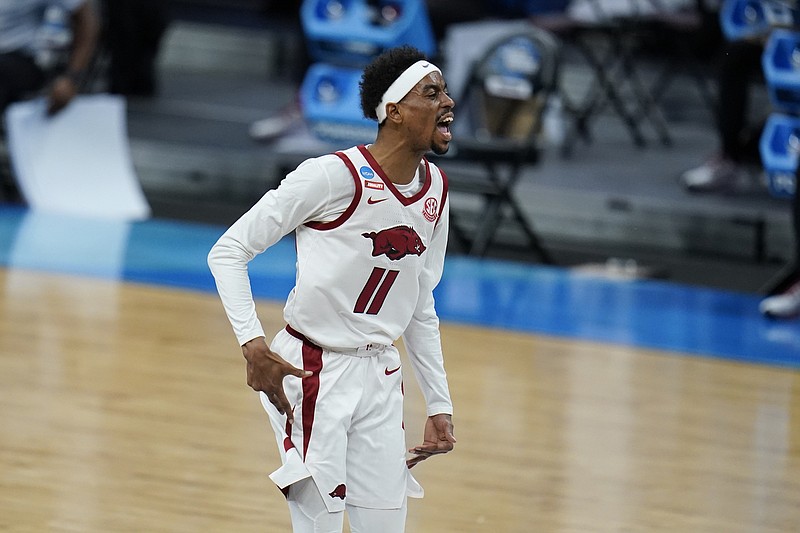 FAYETTEVILLE — Arkansas guard Jalen Tate is officially moving on after one season with the Razorbacks.

The graduate transfer from Northern Kentucky announced Sunday in a post to his Instagram account that he will not return to Arkansas in 2021-22 to take advantage of the extra year of eligibility made available by the NCAA due to covid-19.

“Thank you to the coaching staff at Arkansas allowing me to lead this group,” Tate wrote. “Thank you to my teammates for going to war with me and for y’all support night in and night out. Thank you to my family, friends, and to the fans. It has been a wild ride through my college career.

"With that being said, all great things must come to an end as I’ve decided to forego my COVID year and prepare for what God has in store for me in the future in my professional career.”

Tate was one of two players (Moses Moody) to play in and start all 32 games for Arkansas last season. He averaged 11.0 points and 3.8 rebounds per game and led the Razorbacks in assists with 123. Freshman guard Davonte Davis was second with 64.

A member of the NCAA Tournament All-South Region team, Tate averaged 15.5 points per game in Arkansas’ four tournament games. He scored 22 points on 8 of 14 from two-point range and added six assists in the Razorbacks’ Sweet 16 win over Oral Roberts.