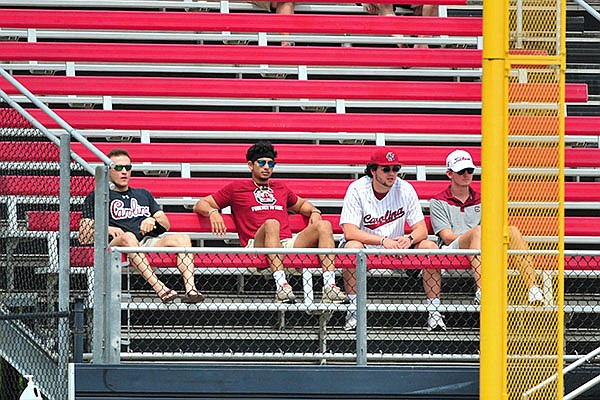 South Carolina fans are shown during a game against Missouri in April 2021. (Photo via SEC pool)

FAYETTEVILLE — South Carolina is expanding its seating capacity at Founders Park for the remainder of the baseball season, beginning with this week’s series against No. 1 Arkansas.

A maximum attendance of 3,350 will be allowed for future games, up from 1,938 for earlier games this season.

South Carolina campus guidelines recently narrowed the recommended social distancing from 6 feet to 3 feet between parties. Those who attend games at Founders Park are still encouraged to wear face coverings.

“Obviously everybody wants a home field advantage, and as many fans as they’ll let in here, I hope that that many come because our guys feed off it, there’s no question about it,” South Carolina coach Mark Kingston said following a 13-4 victory over Missouri on April 11, according to The State newspaper. “And they’ve all seen the videos from a while ago when this place when it was packed full pre-pandemic. They’ve seen how emotional and great it can get and how exciting it is and they love that and hopefully we keep playing well and hopefully they keep letting more fans in because it could be a really fun ride.”

South Carolina is one of several SEC schools to increase capacity since the beginning of the regular season. Ole Miss and Mississippi State have reported weekend attendances in excess of 33,000 as covid-19 guidelines have been lifted in that state, and Arkansas has increased its per-game capacity to 6,585 since an early-season cap of 4,218.

Arkansas and South Carolina are scheduled to play a three-game series beginning Thursday with a 6 p.m. Central game that will be shown on SEC Network. It will be the Razorbacks’ first game at Founders Park since 2016, and the first game between the programs since Arkansas defeated South Carolina two of three times in a 2018 super regional in Fayetteville.