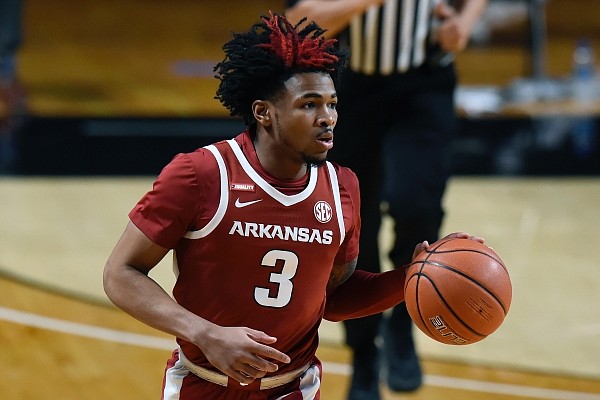 Arkansas guard Desi Sills (3) plays against Vanderbilt during the second half of a game Saturday, Jan. 23, 2021, in Nashville, Tenn. (AP Photo/Mark Zaleski)

Sills, who played three seasons at Arkansas under Mike Anderson and Eric Musselman, is transferring to Auburn, according to a post to his Instagram account on Tuesday. He was the first Razorbacks player to announce his intent to leave the program this offseason and is the second to pledge to an SEC program.

Ethan Henderson, a 6-8 forward, announced April 10 he had committed to Texas A&M.

“Desi had two great years while we’ve been here, and obviously with Coach (Mike) Anderson,” Musselman said on April 1. “We wish him nothing but the best. He was a big part of our culture and helped build it, and had a lot of different roles for us.

“We want nothing but the best for him.”

Sills averaged 7.7 points per game over three seasons in Fayetteville. As a sophomore, he scored a career-high 10.6 points per game and entered the 2020-21 season as a second team All-SEC selection by the league’s coaches.

Sills played in 98 games with the Razorbacks and earned a start in 47, including 15 last season. He saw his minutes decrease from 31.2 per game as a sophomore to 20.7 as a junior.

Sills is the fourth transfer the Tigers have received a commitment from this offseason and the third guard, joining Zep Jasper of College of Charleston (6-1) and Wendell Green of Eastern Kentucky (5-11).