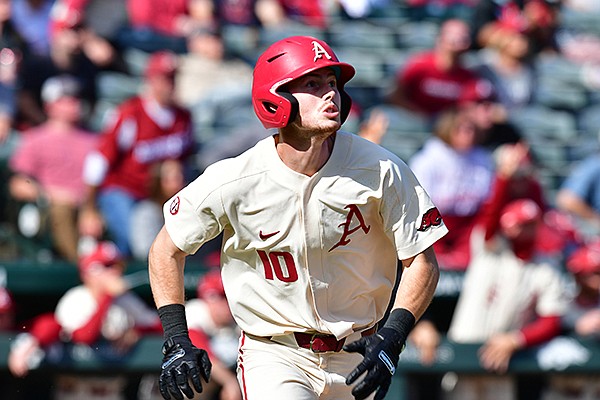 Arkansas' Matt Goodheart watches a home run during a game against Texas A&M on Sunday, April 18, 2021, in Fayetteville.

Editor's note: The Arkansas-Grambling State game on Tuesday has been canceled because of poor weather forecast in Fayetteville.

Goodheart, a senior from Magnolia, was named the Collegiate Baseball Newspaper national player of the week after batting .588 (10 for 17) with 5 home runs and 10 RBI during 4 games last week — one against the University of Arkansas-Pine Bluff and three against Texas A&M.

Goodheart is the first Razorback to earn a national weekly award since second baseman Robert Moore was Perfect Game national player of the week last year.

Wallace, from Greenbrier, was named SEC co-freshman of the week along with Vanderbilt designated hitter Jack Bulger.

While Goodheart earned a national honor, Alabama catcher Sam Praytor was named SEC player of the week. He batted .429 (6 for 14) with 3 home runs and 6 RBI in four games — one against Samford and three against Auburn. He hit two home runs against the Tigers.

Ole Miss junior left-hander Doug Nikhazy, who threw a one-hit shutout and had 12 strikeouts in the Rebels’ 9-0 victory over Mississippi State, was SEC pitcher of the week.

Today’s Arkansas-Grambling State game will start at 5 p.m., the UA announced, instead of the originally scheduled time of 6:30 p.m.

The earlier start is because of a forecast for cold weather. The expected high temperature today is 52 degrees, but that will be at 11 a.m. The temperature is forecast to drop as low as 37 into the afternoon.

Starting the game earlier in the day isn’t a good option because rain is forecast between 1 p.m. and 4 p.m.

Arkansas leads the SEC West and is tied with Vanderbilt for the overall conference lead with an 11-4 record through 15 of 30 games.

“I think pretty much every coach in the league would be happy with 11-4,” Razorbacks Coach Dave Van Horn said. “Starting the second half, and the [next] six games are on the road in conference play [at South Carolina and LSU].

“That’s why we always say when you’ve got a chance to get a win, get a win because you never know how it’s going to go.”

“It’s usually a pretty competitive game,” Arkansas Coach Dave Van Horn said. “They have really good athletes. A lot of times it’s where are we in our pitching and where are they in their pitching?”

Despite the Grambling State matchup being part of a stretch in which the Razorbacks will play seven games in eight days because they had a Saturday doubleheader against the Aggies, Van Horn said he’s glad his team is playing tonight.

“I’d rather play than not play,” Van Horn said. “Get a chance to go out there and hopefully straighten a few things out.

“Hopefully we play well and hopefully we win a game. But yeah, I like to play on Tuesdays.”