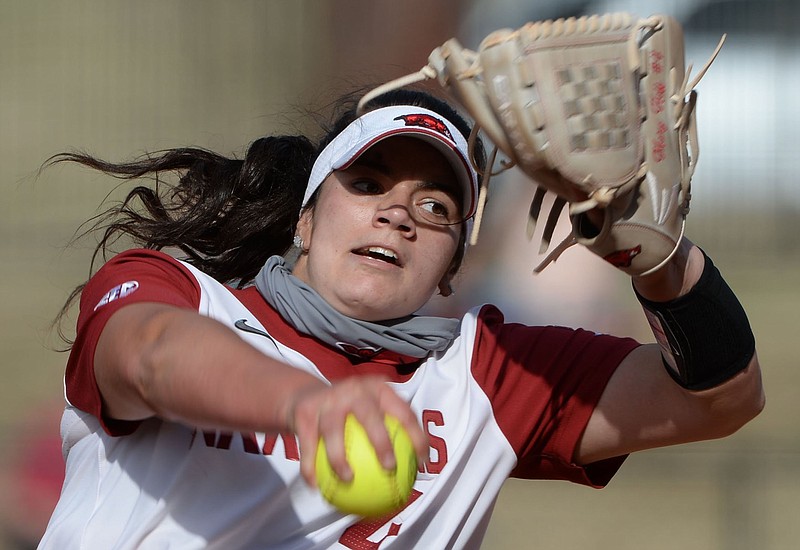 Arkansas pitcher Mary Haff suffered her third loss of the season Friday after allowing all 5 Alabama runs on 6 hits with 3 strikeouts over 32/3 innings of the No. 8 Razorbacks’ 5-3 loss to the No. 3 Crimson Tide at Bogle Park in Fayetteville.

University of Arkansas Coach Courtney Deifel said pitcher Mary Haff was feeling better after dealing with a sore shoulder over the past few weeks.

She proved it over the weekend, picking up a win and two saves to help the No. 10 Razorbacks claim their third SEC sweep on the road this season.

Arkansas (36-5, 16-2 SEC) came back strong after dropping its first SEC series of the season the previous weekend to No. 3 Alabama. The Razorbacks never trailed in sweeping No. 20 Georgia.

“It’s hard to win in this conference,” Deifel said. “It’s even harder to win on the road and it’s crazy to sweep on the road, so to have three sweeps on the road is pretty incredible.”

Having a healthy Haff is huge, Deifel said. She pitched in each game of the series, sandwiching two relief appearances around a complete-game win Saturday. The redshirt junior is now 19-3 with 5 saves in 138 2/3 innings. She’s among the top five in the country in innings, wins and saves.

“She was the old Mary this weekend,” Deifel said. “I thought she had an exceptional weekend for us and was a good match for their swings, which was really nice that we were able to use her as much as we were. And for her to feel that good and look that good was really nice to see.”

Danielle Gibson also snapped out of a recent slump. The redshirt junior went 4 of 10 with 2 home runs and 7 RBI in the series, after going just 1 of her last 21 in SEC play.

Gibson missed four games while in concussion protocol and has struggled since her return, but Deifel said she just kept working. Her two-run home run in the series opener gave Arkansas a 5-2 lead as the Razorbacks went on to rout the Bulldogs 10-3. She added a sacrifice fly and a solo home run in the second game, a 5-2 Arkansas win.

“It is her just taking a breath,” Deifel said. “This game, it’s a really hard game. She just worked and kind of got back to who she was. She’s a very confident hitter, and you can see this game have an effect on someone like Gibby.

“I’m really proud of her just staying the course and staying true to who she is and allowing the game to come back to her.”

Arkansas and Florida don’t play each other in the regular season. The Gators finish the season with three series, sandwiching two home series against South Carolina and Texas A&M around hosting No. 19 Missouri.

Arkansas hosts Missouri and travels to No. 15 LSU before the SEC Tournament in Tuscaloosa, Ala., which is slated to start May 11.