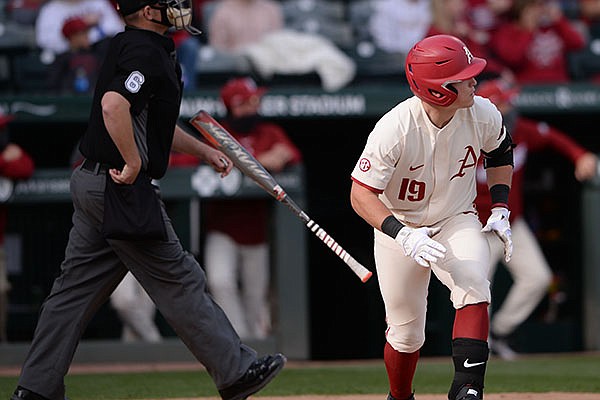 Arkansas designated hitter Charlie Welch watches Wednesday, April 14, 2021, as a two-run home run leaves the field during the third inning of the Razorbacks' 26-1 win over UAPB at Baum-Walker Stadium in Fayetteville.

FAYETTEVILLE — A big reason the University of Arkansas baseball team is ranked No. 1 in the national polls is that the Razorbacks also are No. 1 in home runs.

The Razorbacks (30-6, 11-4 Southeastern Conference) lead the nation with 70 home runs after hitting 16 last week, including nine in a two-game sweep of the University of Arkansas-Pine Bluff and seven in taking two of three games against Texas A&M.

“They have some really good hitters up and down the lineup,” Aggies coach Rob Childress said. “Very good balance, very left-handed.

“They do a great job of managing at-bats. They don’t give at-bats away. Then they’re hard to put away.”

“As far as spreading it out, that’s what we thought we would do,” Arkansas coach Dave Van Horn said. “When the season ends, we projected we’d have three or four guys with 10 to 12 to 15 home runs, and it may still happen. Then a few other guys with maybe six, seven, eight. I think that’s happening as well. You never know.

“Sometimes it’s about the weather — which way the wind’s blowing. You hit a bunch in a week and you don’t hit any for two weeks, but we’ve been pretty consistent on hitting the ball over people’s heads.”

The Razorbacks have hit at least one home run in 25 of their 36 games. They have eight more home runs than second-place Old Dominion, which has 62 in 34 games. LSU has 54 home runs in 35 games and is tied for third with South Carolina and Southern Illinois, which both have 54 in 34 games.

Arkansas hit eight home runs in a 26-1 victory over UAPB on Wednesday — two each by Goodheart, Slavens, Cullen Smith and Charlie Welch.

“I think Matt’s doing a good job with his pitch selection,” Van Horn said. “Just being aggressive and letting it go, but also laying off some borderline pitches early that if they’re called a ball, it gives him an advantage.

“He’s gotten into some good advantage counts, and that’s when he’s done his damage.”

Arkansas is on pace to break its season record for home runs of 98 set in 2018 when the Razorbacks played 69 games. Heston Kjerstad and Eric Cole hit 14 each, and Casey Martin and Carson Shaddy hit 13 apiece.

In 15 SEC games, Arkansas, Alabama and Auburn each have hit 24 home runs to share the lead.

Despite losing Kjerstad and Martin, after fall practice Van Horn predicted the Razorbacks again would be a good home run-hitting team.

“So I still think the home run will be a part of our offense. We’re going to have some guys up and down that lineup who have a chance to hit 10 to 12 to 15 home runs.”

That’s the way it’s turning out.