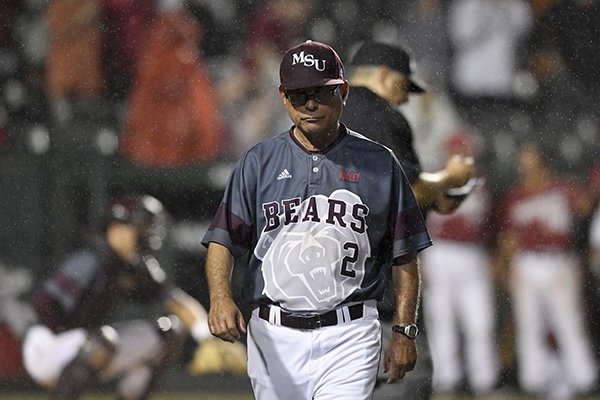 Missouri State coach Keith Guttin walks back to the bench after talking with the home plate umpire about his decision to continue the game against Arkansas after heavy rain began to fall in the 8th inning of an NCAA college baseball regional tournament game, Sunday, June 4, 2017, in Fayetteville, Ark. (AP Photo/Michael Woods)

FAYETTEVILLE — Arkansas' scheduled baseball game against Missouri State next week has been canceled due to positive covid-19 testing within the Bears' program.

The teams were scheduled to play Tuesday at Baum-Walker Stadium in Fayetteville. It marks the Razorbacks' second consecutive midweek game to be canceled. Arkansas called off its game against Grambling State this week due to snow and below-freezing temperatures in Fayetteville.

According to a news release, single-game ticket holders for the Missouri State game will be refunded. With the cancelation, Arkansas has only one midweek game remaining on its schedule, against Arkansas State on May 11 at Baum-Walker Stadium.

Arkansas coach Dave Van Horn said Wednesday he has reached out to some teams — he didn't specify which ones — about scheduling a replacement game, but said finding an opponent this late in the year will be difficult.

"A lot of teams, they don’t want to travel this time of year. They’ve already done their traveling," Van Horn said. "So I would say as of now we’re probably not going to play anybody next week before we head to LSU.

"We’ll use that time to rest, get stronger and get better."

Missouri State is 14-11 overall and 5-3 in the Missouri Valley Conference this season. The Bears have canceled a total of six games due to the positive testing, including one game against Missouri and four games against Southeast Missouri State.

This is the second consecutive year Arkansas and Missouri State have had a game canceled due to covid-19. The teams have a long-standing annual matchup that dates to 1966, and in 2015 and 2017 they met in the NCAA Tournament.