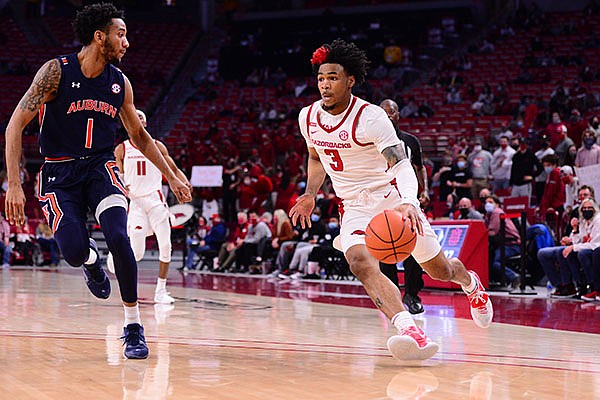 Sills — who as a junior guard for the University of Arkansas this season had the two highest-scoring games of his career with 23 and 22 points in the Razorbacks’ victories over Auburn is joining the Tigers.

The 6-2 Sills, who is from Jonesboro, announced Tuesday on his Instagram account he has committed to Auburn, one of Arkansas’ SEC rivals. The news comes three weeks after Sills announced March 31 he was entering the transfer portal.

With the NCAA Division I Council passing a one-time transfer waiver last week and all athletes being granted an extra year of eligibility because of the coronavirus pandemic, Sills will have two seasons to play for the team he previously tormented.

“Desi’s the Auburn killer,” Jalen Tate, a senior guard for the Razorbacks last season, said after Sills hit 7 of 12 shots and 8 of 10 free throws while scoring 22 points in Arkansas’ 75-73 victory over the Tigers on Jan. 20 in Walton Arena. “The War Eagle slayer.”

It was the start of a 12-game winning streak for the Razorbacks against SEC teams and turned their season around as they rallied from a 19-point deficit in the first half after suffering road losses at LSU and Alabama to fall to 2-4 in conference play.

“Desi Sills is the most experienced player out there, and he was the best player out there in a lot of ways,” Pearl said after the game. “Really good player, fun kid to watch. I really like him.”

Sills started 15 of 32 games this season and averaged 7.5 points, 2.7 rebounds, 1.6 assists and 20.7 minutes for an Arkansas team that reached the NCAA Tournament Elite Eight for the first time since 1995 and finished 25-7.

The Tigers needed to add guards with Sharife Cooper entering the NBA Draft, and Justin Powell transferring to Tennessee and Jamal Johnson transferring to Alabama-Birmingham.

Sills will be the third Arkansan on the Auburn roster along with guard Allen Flanigan (Little Rock Parkview) and forward Chris Moore (West Memphis). Javon Franklin, a forward from Parkview, is transferring from Auburn to South Alabama.

Flanigan, who averaged 14.3 points last season, announced Tuesday he will return to Auburn for his junior season after considering whether to enter the NBA Draft. His father, Wes Flanigan, is an Auburn assistant coach and former head coach at the University of Arkansas at Little Rock.

Based on the recent rotation of SEC games, Auburn will play Arkansas once during the 2021-22 season with the game at Auburn Arena.

“I’m always going to support Desi,” Razorbacks guard Davonte “Devo” Davis said earlier this month after Sills announced he was leaving Arkansas. “We will always be close friends and that will never change.”

Playing time for Sills became inconsistent the latter part of this season, but in his final two games he played 28 minutes in Arkansas’ 72-70 victory over Oral Roberts and 31 in an 81-72 loss to Baylor. He had 2 points, 6 rebounds and 4 assists in each game.

“First of all, Desi had two great years while we’ve been here, and obviously with Coach [Mike] Anderson,” Arkansas Coach Eric Musselman said after Sills announced his decision to transfer. “We wish him nothing but the best.

“Big part of our culture and helped build it, and had a lot of different roles for us.”

Sills is the second Arkansas player from this season’s team along with Ethan Henderson to transfer to another SEC school.

Henderson, a 6-8 forward from Little Rock Parkview, is transferring to Texas A&M, which will play Arkansas home-and-home next season.