Class 2A Clarendon will include 2 Razorback commits 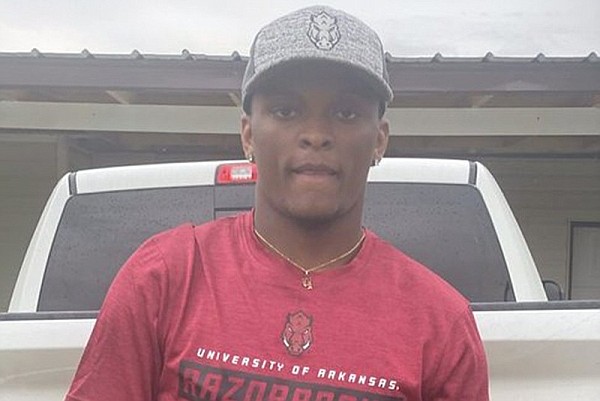 Arkansas football fans wanting to see future Razorbacks play next season can see a pair in one place during the 2021 campaign.

Courtney will team with new Razorback 4-star wide receiver pledge Quincey McAdoo (6-3, 180), who committed to Arkansas on Friday after previously being pledged to Florida State.

“I am extremely excited to be playing with Quincey, especially to know that we’re going to be playing together for the next five years,” Dax Courtney said. “A couple of other guys and I worked really hard to get him to the University so to get that done really makes this whole ordeal better.”

McAdoo, whose team returns 10 starters on both offense and defense, agrees with that sentiment.

“It’s a blessing getting a chance to play high school ball with my future college teammate,” McAdoo said. “I feel like we both know what we have to do to make each other better and we can get this offensive chemistry going before college.”

“Dax will be able to play with Quincey and that’s two pretty highly recruited dudes,” Mark Courtney said. “That will be a of fun. I am going to coach them hard and make sure they get better every day and keep their eyes on the prize.

“These kids are both talented and good enough that they could both still be playing football 10 years from now.”

Arkansas had nine commits and is currently ranked 12th nationally by 247Sports' composite rankings that take into account ESPN’s and Rivals’ lists as well.

“I think the Arkansas program is obviously on the rise,” Mark Courtney said. “You look at what they have done in these first two recruiting classes, and it’s not just because my son is in the 2022 class, but it is kind of incredible.

“They are pulling Alabama-type recruits. That’s not something that regularly happens at Arkansas. Some of these kids have a top five that includes Alabama, Auburn, LSU, Georgia and Arkansas and then they are coming to Arkansas. That speaks for itself.”

Dax Courtney played through a dislocated knee injury last season he suffered in Week 3, but should be cleared and fully healthy in June.

“He really wanted to play and we rehabbed and rehabbed until he could play,” Mark Courtney said. “He came back and played the last half of the season.

“He’s my son and I don’t want to act like I am just bragging on him, but we were literally taping his knee cap in place so he could play with his buddies. He didn’t want to feel like he let them down.

“When the season was over, we started talking to a surgeon and talked to (Arkansas coach Sam) Pittman and a few of them up there and we were all on the same page – let’s get it fixed.

“We had surgery in January I think and he has done really good. He has come through rehab and recovery well and he is already straight line running. It wasn’t one of your major ligaments, it was one that goes from your kneecap to your femur.”

Courtney is thrilled to be back coaching in Class 2A and taking over at Clarendon, 7-3 last season.

“I love Class 2A football and I am happy to get back to it,” Mark Courtney said. “It has its own challenges and its own rewards. It’s a fresh start and I get to coach Dax his senior year and we are walking into a great situation.

“(Clarendon) not only has Quincey, but a lot of other talented and good-looking players.”

The older Courtney and McAdoo have been able to meet and talk about the future.

“He just seems like a really great kid, very respectful, yes sir, no sir guy,” Mark Courtney said. “We talked about expectations and our expectations are both through the roof. He’s on board.”

McAdoo reminds his new head coach of a former Razorback he had at East Poinsett County.

“He reminds me of a kid I had at EPC in Ky Madden, who chose to play basketball in college,” Mark Courtney said. “I have watched a little bit of Quincey on film and he is that type of athlete that can really make a lot of plays that elite athletes make.”