Hogs to play Auburn on Homecoming in 2021 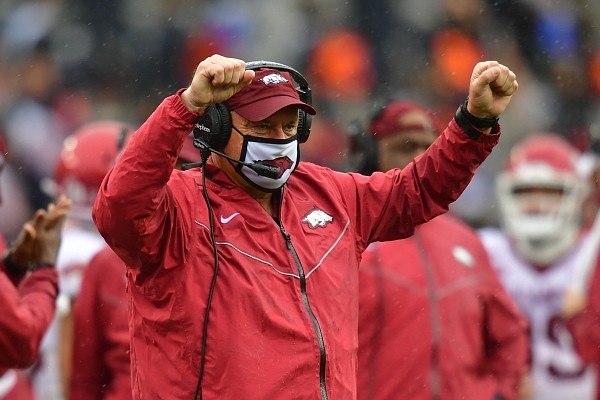 Arkansas coach Sam Pittman celebrates on the sideline during the Razorbacks' game at No. 13 Auburn on Oct. 10, 2020.

FAYETTEVILLE — Arkansas announced Friday that it will play Auburn for its Homecoming game in 2021.

The Razorbacks and Tigers are scheduled to meet Oct. 16 at Donald W. Reynolds Razorback Stadium. Auburn has won five consecutive games in the series, including a controversial 30-28 decision at Jordan-Hare Stadium in 2020.

Arkansas also announced Friday it will host its annual Family Weekend for a Sept. 18 game against Georgia Southern.

The Razorbacks are scheduled to play six games in Fayetteville, highlighted by Texas on Sept. 11 and Missouri on Friday, Nov. 26. Arkansas is also scheduled to host Arkansas-Pine Bluff in Little Rock on Oct. 23.

The season is scheduled to begin with a home game against Rice on Sept. 4.