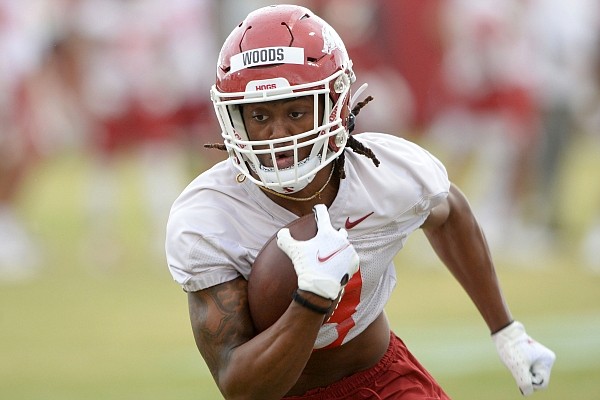 Arkansas receiver Mike Woods runs after the catch during a practice on March 11, 2021, in Fayetteville.

Woods, who played three seasons with the Razorbacks from 2018-2020, has committed to Big 12 power Oklahoma, according to a post to his Twitter account. He announced Tuesday he was entering the NCAA transfer portal as a graduate transfer.

“I would like to announce I will attend THE UNIVERSITY OF OKLAHOMA for the remainder of my college career,” Woods wrote.

He finished with career highs in receiving yards (619) and touchdown catches (5) in his last season at Arkansas and was a deep-ball favorite of quarterback Feleipe Franks. Woods had two receptions for 40 yards and a touchdown in the Razorbacks’ spring game on April 17, three days before making public his plans to leave the program.

Woods averaged 19.3 yards per catch in 2020, the highest mark among players with 10-plus receptions.

A 3-star receiver in the Razorbacks’ 2018 class who caught 41 touchdown passes at Magnolia (Texas) High School, Woods signed with Arkansas over scholarship offers from Washington State, Colorado State, Vanderbilt, SMU and other programs.

As a high school senior, Woods flipped his commitment from SMU to Arkansas within a week of when the Razorbacks hired SMU coach Chad Morris in December 2017.