Arkansas in first place, but staying in present 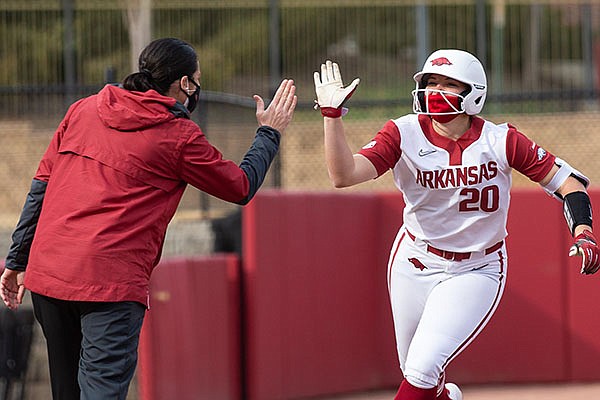 FAYETTEVILLE — The No. 6 University of Arkansas softball team sits atop the SEC standings with six games remaining, but Coach Courtney Deifel said the Razorbacks aren’t thinking about a regular-season championship just yet.

“We know what needs to happen,” Deifel said. “We know what we need to do and ultimately if we take care of business, then we control our own destiny. We don’t talk about it because what this team has done so well is be in the moment.”

Deifel acknowledged the team wasn’t as focused earlier this week against the University of Central Arkansas. The Razorbacks claimed a 7-6 win in 8 innings over the Bears on Wednesday after UCA tied the game with three unearned runs in the top of the seventh.

“[Wednesday] night was a little out of character,” she said. “We felt like we learned a big lesson, and it’s always nice to learn big lessons from wins.”

Arkansas will honor nine Razorbacks who will play their final regular-season games at Bogle Park in this series. That includes Sydney Parr, who chose not to play this season despite having the opportunity for an extra year because of the pandemic.

They will be honored in pregame ceremonies Sunday. That game is slated to start at 3 p.m., while Monday’s series finale is set for6 p.m.

“That class, those super seniors — the five and Parr — this is the class that changed the trajectory of our program,” Deifel said. “They were at the ground level of getting this thing going as I think about Autumn Storms pitching us to a regional as a freshman.

“Keely Huffine, her path has not been straight. She’s played, I don’t know, five, six different positions and done everything she could for this team. I’m so proud of all nine of them.”

Fifth-year senior Braxton Burnside transferred to Fayetteville after playing two seasons at Missouri. The Paragould native hit her 23rd home run of the season in the bottom of the eighth inning Wednesday to beat UCA. She long ago passed the school record of 17 home runs. She is also tied for tops in the country in home runs, fourth with 50 RBI, and fifth in total bases with 123.

Deifel didn’t expect Burnside’s huge season, but she’s not surprised by it either.

“You could tell she’s special before she even went to Missouri,” Deifel said. “She’s such a student of the game … that you have such appreciation for when she’s in the other dugout. But that’s magnified a thousand times when she’s in your own dugout.

Junior Danielle Gibson agreed the group has had a tremendous impact on the program and their teammates.

“Every single one of these seniors has had some special impact on the way we play the game,” said Gibson, whose team-best .377 batting average is two points higher than Burnside. “The way that Arkansas now is viewed as a top program, I can’t wait to honor every single one of them. They have no idea how much they’ve impacted our lives.”

But Arkansas pitchers have done the job in league play, ranking second with a team ERA of 1.66. The Tigers’ batting average of .298 in SEC play is best in the league.