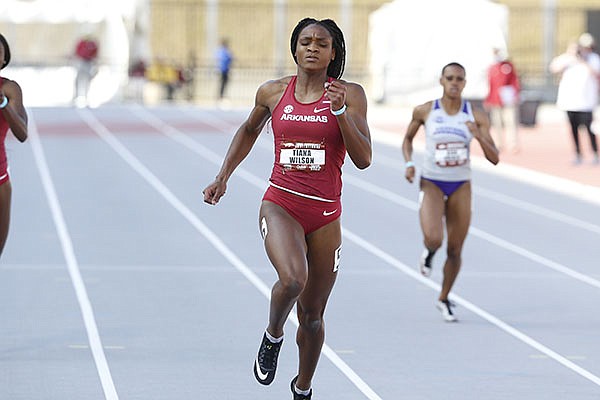 FAYETTEVILLE — Tiana Wilson got the University of Arkansas’ first home outdoor track and field meet in two years off to a fast start Saturday at the John McDonnell Invitational.

Wilson, a Razorbacks sophomore from Hamburg, opened the running events at John McDonnell Field by winning the 200 meters in a personal-best 23.21 seconds, which ranks No. 8 on Arkansas’ all-time list.

“One of the nicest, most complimentary things that I get is from other coaches seeing Tiana run and going, ‘Oh my God, where did she come from? What country is she from?’ ” Arkansas women’s Coach Lance Harter said. “I go, ‘She’s from southeastern Arkansas.’

“They go, ‘Really? I never heard of her before.’ Tiana is one of those kids that was under the radar in the state of Arkansas and she’s come here and risen up.

“She’s a pleasant individual and she works really hard. She’s a very impressive athlete and a great competitor out there. She’s really fun to watch.”

The No. 2 Arkansas women’s team took the top four spots in the 200 with sophomore Yoveinny Mota taking second in a personal-best 23.42. She was followed by freshman Jayla Hollis in third (23.92) and junior Morgan Burks-Magee in fourth (24.03).

“A lot of times the first event establishes your momentum,” Harter said. “Obviously people get fired up going, ‘Hey, the 200-meter runners put on a nice show today. So let’s follow suit.’

“That just kind of carries over from event to event.”

The Razorbacks went 1-2 in the pole vault with senior Lauren Martinez and sophomore Nastassja Campbell each clearing 14 feet, 4 3/4 inches.

Martinez, who set her personal best, was the winner based on fewer misses at lower heights. Arkansas freshman Kaitlyn Banas cleared a personal-best 13-9 to take fourth.

University of Central Arkansas senior Zachary Jewell, from Mena, won the 200 in a personal-best 20.84. ASU sophomore Jermie Walker was third in 21.30.

Arkansas senior Nick Hilson, from Jonesboro, won the 400 hurdles in a season-best 50.75.

ASU junior Grace Flowers won the hammer (188-5) and took second in the discus (151-1). The Red Wolves also got a victory in the discus with junior Babette Vandeput throwing 173-9.

Chastery Fuamatu, an ASU junior from Gentry, took second in the hammer (179-7) and sophomore Evangelynn Harris was third in the discus (149-3).

The times for Izzo, Van Camp and Hyde were all personal bests.

Alabama sophomore Mercy Chelangat, the NCAA cross country champion, won the 5,000 in 15:17.79. Arkansas didn’t have any entrants in the race, Harter said, because the Razorbacks will focus on the 5,000 next weekend in Fresno, Calif.

Arkansas junior Logan Morris, a transfer from Clemson, took third in the women’s steeplechase in 10:07.80. Morris’ time is No. 8 on the UA’s all-time list and was just off her personal-best 10:07.13 when she took second at the 2018 ACC Championships.

UCA senior Jaron Hamilton was fourth in the men’s steeplechase in 8:59.42.

Former Razorback Erich Sullins, competing unattached, won the hammer with a meet record throw of 235-10, which qualifies for the United States Olympic Trials.

Arkansas freshman Ruben Banks was fourth in the hammer with a personal-best throw of 219-4.

The University of Arkansas-Pine Bluff took second and third in the shotput with sophomore Deandre Fyffee (55-11 3/4) and freshman Danniel Bailey (49-1 3/4).

Admission is $5 for adults and free for those 17 and under. Fans can sit in the east side stands and must wear masks.

Saturday had a announced attendance of 867, and it marked the first time this year Arkansas had fans at a meet. No fans were allowed during the indoor season because of covid-19 safety protocols.

“We haven’t seen crowds in a long time, so that was very much eventful for us,” Harter said. “Hopefully we’ll get a nice crowd again on Sunday.”