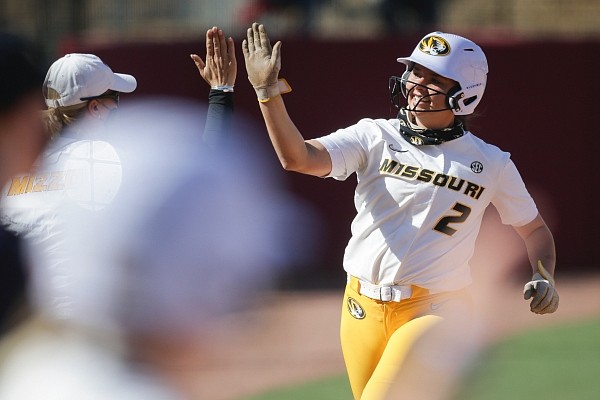 Missouri infielder Kendyll Bailey (2) scores, Sunday, April 25, 2021 during a softball game at Bogle Park in Fayetteville. Check out nwaonline.com/210426Daily/ for the photo gallery.

FAYETTEVILLE — Kayla Green gave No. 6 Arkansas an early spark with a game-tying home run, but No. 19 Missouri grabbed the momentum right back and routed the Razorbacks 10-1 on Sunday afternoon in Bogle Park.

The Tigers broke open a close game with a five-run sixth inning, highlighted by Brooke Wilmes’ two-out grand slam that helped send the University of Arkansas to back-to-back losses for the first time this season.

The Razorbacks (37-7, 16-4) are now tied with Florida (14-4) in the loss column atop the SEC standings. Arkansas will finish its series against Missouri tonight in a game that’s scheduled to start at 6 o’clock. The Gators have six games left, while Arkansas has only a three-game set at LSU remaining. Missouri (34-10, 12-5) has now jumped into the title race, sitting alone in third, with a series against Florida coming up.

“They’re just flat out-playing us right now,” Deifel said. “We’re in a funk right now that we’ve got to find a way to get out of. More so, we’re just trying to figure out how we can get back on track. We’ve had a great year, and we just have to figure out how to get back to who we are.

“I don’t feel like we’re fighting that hard, and we’re just giving away a little too much. You just can’t with a team like Missouri or any team for that matter.”

Green’s 11th home run of the season, a solo shot in the bottom of the second was the lone highlight for Arkansas. Missouri came right back in the top of the third to regain the lead as Hatti Moore’s double-play grounder drove in Jenna Laird.

The Tigers took control with the five-run sixth aided by an Arkansas error and added two more in the seventh.

Arkansas was limited to two hits for the second consecutive game.

Senior Braxton Burnside, who entered the weekend tied for tops in the county with 23 home runs, said the Razorbacks just have to be better.

“I think there’s just one obvious elephant in the room,” Burnside said. “We’re just getting out-performed. The last two games, three games really, we just have been out-performed. … All three aspects of the game we’re being out-performed and when that happens, you’re going to get beat.

“I think we’re having a lot of trouble finding momentum. That’s what we thrive on. [Saturday], we had momentum early they took it and we were never able to get it back. Today, they took a lead and we punched back but then they put us right back on our back. We’re just going to take a deep breath and get to work on our performance.”

Freshman Laurin Krings (7-2) came on after Ally Manzo’s single in the second inning and allowed one Razorback baserunner the rest of the way. Krings pitched 5 1/3 hitless innings, struck out five and did not walk a batter to earn the win in relief of starter Megan Schumacher.

Linnie Malkin was the only Razorback to reach base against Krings when she was hit by a 3-1 pitch with one out in the fourth.

Missouri banged out 13 hits, as five different Tigers had two hits each. Arkansas pitching gave up double figure hits for the third consecutive game, a first this season.

Pitcher Autumn Storms, a normal weekend starter for the Razorbacks, was unavailable Sunday because of an undisclosed physical issue, Deifel said. The All American and preseason All-SEC pick is 7-1 with 3 saves and a 1.37 ERA this season but was limited earlier this year because of a back problem.

“It’s just us being really, really conservative at this time of the year,” Deifel said.

Deifel said she wasn’t sure who would be her starting pitcher tonight.