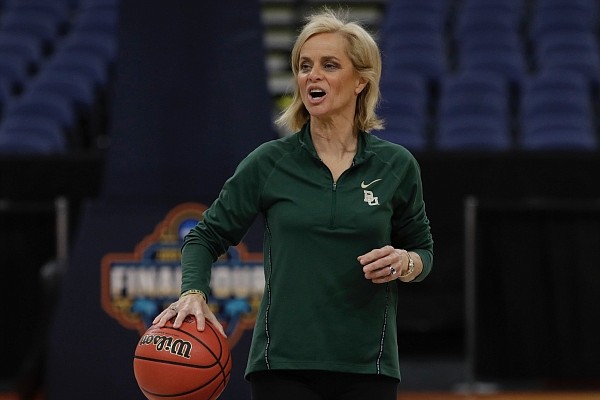 The school announced the move Sunday.

Mulkey, who won three national championships at Baylor, is a native of Tickfaw, La. She helped Baylor win the 2019 NCAA championship, and the Bears lost in the regional finals to UConn last month.

"Kim Mulkey is a champion and a Hall of Famer, and we are thrilled to welcome her home," LSU athletic director Scott Woodward said. "Her accomplishments are unprecedented, her passion is unrivaled, and her commitment to winning in all aspects of life — in the classroom, on the court, and in the community – is unparalleled.

"We look forward to working with her as she instills that championship culture at LSU."

The 58-year-old coach inherits an LSU team that went 9-13 last season and hasn't made it past the Sweet 16 since 2007. She became the fastest coach in Division I history to reach 600 wins — needing only 700 games to do it.

Mulkey replaces Nikki Fargas, who stepped down earlier this week.

In 21 years as the head coach at Baylor, Mulkey led the Lady Bears to four Final Fours, winning three national titles. Her teams reached the Elite Eight six times and the Sweet 16 on five other occasions.

A member of the 2020 Naismith Memorial Basketball Hall of Fame Class, Mulkey, who will be introduced at LSU in a press conference Monday, built Baylor into a national power, as they became just the third program in NCAA history to have at least three national titles, joining UConn and Tennessee.

Before coming to Baylor, Mulkey spent 19 years as a player or coach at Louisiana Tech. She helped the Lady Techsters win the first NCAA championship in 1982.

Baylor will begin a search for a new coach.

"We are grateful for the more than two decades Kim Mulkey poured into building Baylor women's basketball to one of the nation's premier programs," Bears athletic director Mack Rhoades said. "Coach Mulkey's sustained success is one of the most remarkable runs in college basketball history, and her accomplishments are worthy of the Naismith Hall of Fame induction she'll experience later this year."