'The wait is over': Kamani Johnson has a point to prove 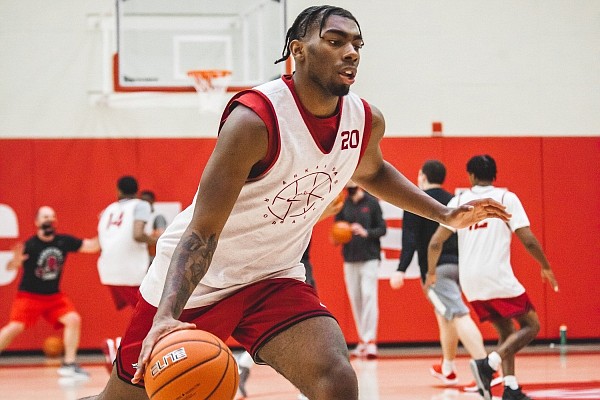 Arkansas forward Kamani Johnson dribbles during a practice on Dec. 19, 2020, at the Basketball Performance Center.

A 6-7 forward who signed with Arkansas in October and joined the Razorbacks in late December after transferring from Arkansas-Little Rock, Johnson was forced to play the waiting game. He and Arkansas’ coaching staff were hopeful his waiver for immediate eligibility would be granted by the NCAA early in 2021.

As they awaited word on his status, the focus was working Johnson into game shape. He had not played in a game since March 3, 2020, when he posted 24 points and nine rebounds for the Trojans against Georgia State.

That approval never came. The Brooklyn native then switched gears and began preparing his body and mind for the 2021-22 season. In the meantime, he became the best teammate he could be as the Razorbacks made their run to the Elite Eight of the NCAA Tournament.

“It was hard, I’m not even going to lie to you, just because of the sense of not knowing, not knowing if you’re going to play or not,” Johnson said. “It wasn’t easy. Watching in Indianapolis and watching them lose was the hardest thing to me. I was in the stands going crazy watching a game I know I could’ve helped in.

“It was definitely hard, but my friends had my back and my family did a good job of having my back. I got through it. I’m ready for next year. The wait is over.”

On Arkansas’ re-tooled roster for next season, Johnson expects to be a factor in the frontcourt who provides the team a high level of physicality, toughness and energy on both ends of the floor. Those characteristics were berthed at a young age through countless games against his family and friends, including his older brother, Dakari, who played two seasons at Kentucky and advanced to a Final Four.

They were on display, too, this spring during the Razorbacks’ practices, where Johnson felt he competed well. On the scout team, he often acted as the opposing team’s best player.

“The coaches had to tell me to calm down a little,” Johnson said. “I haven’t played basketball in a year, so when I touch the court I only know full speed. This year is super personal for me. I don’t think I’ve sat out a full basketball year ever.

“Man, I’m just ready to get back out there. I’m anxious.”

In his final season at UALR, Johnson led the country in free throw rate, according to KenPom data, and was No. 40 nationally in offensive rebound rate (13.2%). He attempted 192 free throws and 190 shots from the floor, and grabbed 94 offensive rebounds.

“I’m physical, man. Whatever the team needs me to do, that’s what I’m going to do.”

On April 1, Eric Musselman, entering his third season with the Razorbacks, described the forward as a player who seeks out contact and has a similar body frame as Justin Smith.

“At times this year, I was like, ‘Yo, back off,’ because he’s physical and I didn’t want anybody to get hurt,” Musselman said. “When he goes to the rim, he’s a physical dude. He’s got great strength, and obviously you’re going to be able to put him in situations where he can try to get your team in the early bonus quickly.

“He’s a player we’re really excited about. He gives us an energy guy, a loose-ball getter.”

Johnson believes he has set himself up to improve his on-court play and production and make a difference in the SEC thanks to his training with strength and conditioning coach Dave Richardson. The workouts are intense, he said, and while he may not enjoy them in the moment, the results speak for themselves.

He arrived at Arkansas at approximately 212 pounds. Entering the summer months, Johnson is roughly 234 pounds and hovering around his goal weight of 235. The aim now is to lean out his weight and build muscle.

“We’re right on progress with where I want to be,” he said. “I feel real good. I was kind of concerned about it because I usually play at like 220. I’ve never been this big, but I’m actually moving better than I was, which is crazy. I feel really good at this weight.”

Johnson is continually working on his jump shot and improving his touch, he said. His initial weeks on campus were dedicated to form shots after the coaching staff and graduate assistants broke down his jumper step by step.

His goal is to pull one or two jumpers per game next season, including threes, to stretch the floor and help Arkansas’ offense flow as it is supposed to. Johnson attempted only two threes over two seasons in Little Rock, missing both.

He takes great pride in his defense as well, and his game centers around it, he said. Johnson has been known to take charges and he is eager to add to the Razorbacks’ charge wall. Defense is about matchups and winning those 1-on-1s.

His competitive nature takes over in those situations.

“I think I can guard 1 through 5,” Johnson said. “I take that real personal. I don’t like being scored on, so I’m doing anything to not let that happen. I’m trying not to let my man catch it.”

Above all else, Johnson wants Arkansas fans to know he is a winner. He believes he has had only one losing season throughout his playing career — as a freshman with the Trojans.

“I hate losing, man. If you see me after a loss I’m probably miserable somewhere,” he added. “I’m just big on winning, man, and this coming up year, that’s the main focus — just winning. We feel like we have a team that can make a pretty good run. We know there’s a process to it, but the culture around here is a winning culture.

“We want to do what we did last year, but we want more. And I feel like I have a point to prove, not only to myself but to anyone who counted me out.”