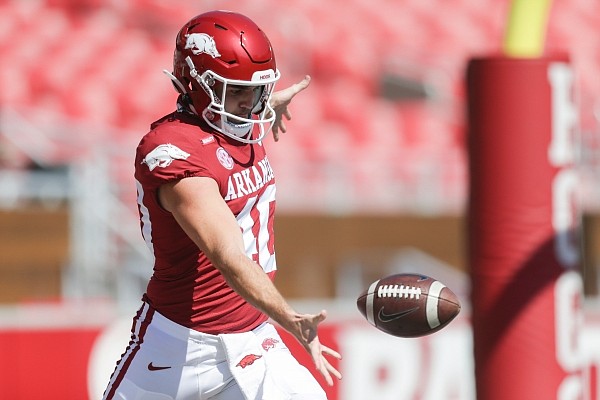 FAYETTEVILLE — An Arkansas specialist has entered the NCAA transfer portal.

George Caratan, a punter who saw the field in three games in 2020, intends to leave the Razorbacks’ program. He is the fourth Arkansas player to enter the transfer portal since the end of spring drills.

A transfer from Michigan who arrived on campus ahead of last season, Caratan averaged 45.4 yards on 16 punts in 2020. Four of his punts were downed inside the 20 and four traveled 50-plus yards.

Caratan had a long of 52 yards. He also had two punts blocked against Georgia and Auburn, and Reid Bauer assumed punting duties for a majority of the remainder of the schedule.

Bauer ranked fifth in the SEC in punting average at 43.5 yards, according to cfbstats.com.

In Arkansas’ spring game on April 17, Caratan punted twice for 81 yards with a long of 43.

After leaving the Wolverines, he chose the Razorbacks over Missouri and San Diego State, citing relationships with Sam Pittman and special teams coordinator Scott Fountain.

Razorbacks to transfer since end of spring