4 Razorback teams to compete in Baton Rouge this weekend 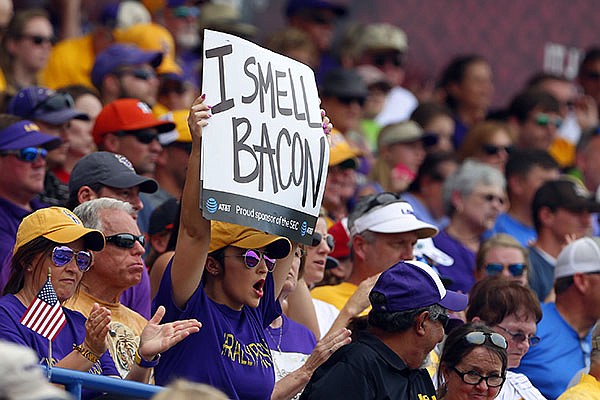 An LSU fan holds up a sign during the first inning of the championship game against Arkansas in the Southeastern Conference NCAA college baseball tournament, Sunday, May 28, 2017, in Hoover, Ala. (AP Photo/Butch Dill)

FAYETTEVILLE — The Arkansas Razorbacks are going to be all over the LSU campus in Baton Rouge this weekend.

Four University of Arkansas sports teams — baseball, softball, and men’s and women’s track and field — will take on the Tigers.

The Razorbacks’ No. 1 baseball team will start the competition against LSU on Friday night at Alex Box Stadium to open a three-game series.

Arkansas’ No. 7 softball team will open a three-game series against No. 14 LSU on Saturday night at Tiger Park.

Also on Saturday, the Razorbacks’ No. 2 women’s track and field team and No. 12 men’s team will compete in the LSU Invitational at Bernie Moore Stadium in a meet hosted by the Tigers, who have both the No. 1 men’s and women’s teams.

“We follow each other,” Arkansas baseball Coach Dave Van Horn said of all the UA teams. “We pull for each other.”

Deifel said that after Arkansas beat Missouri 8-4 in softball on Monday night, she checked her phone and two of the first texts she received were from Sam Pittman — the Razorbacks’ football coach — and Van Horn.

“I just don’t think that’s typical on most campuses that the football coach and the baseball coach are texting the softball coach after a big win,” Deifel said. “But it’s really in all of our sports. All the coaching staffs are so supportive of each other.

“It’s unlike anywhere else I’ve coached, where you feel the support from every sport. It’s just a really cool environment to coach in.”

Deifel said she also got a text from Pittman on Sunday night after Arkansas lost its second consecutive game to Missouri — the first back-to-back losses for the team this season.

“Sam said something like, ‘I just want to remind you of all the great things you’re doing and that being yourself is plenty enough,’ ” Deifel said. “Just so encouraging.”

LSU announced Wednesday it will allow full capacity at its sporting venues for the rest of the year in accordance with a proclamation by Louisiana Gov. John Bel Edwards that 100% attendance is now allowed in the state.

That means all of Alex Box Stadium’s 10,326 seats can be filled after LSU’s previous largest home crowd this season had been 5,031 for a game against Mississippi State.

But there should be some Hog calls heard at the baseball games, too.

Nick Zimmerman, a third-year LSU veterinary school student, is from North Little Rock. He played golf at the University of Arkansas at Little Rock, but he is a die-hard Razorbacks fan.

“I’m a big Hog fan,” said Zimmerman, whose uncle, Matt Zimmerman, is a former Arkansas assistant basketball coach and now the color analyst on the UA radio broadcast. “It’s in my blood.”

Nick Zimmerman said he’s among about 40 Arkansans in the LSU veterinary school, and a group of them hope to attend the baseball games if their work schedules allow for it.

“I can already feel a vibe on campus about the baseball series,” said Zimmerman, a graduate of Sylvan Hills. “It’s going to be a packed stadium, and I know the Razorbacks are going to be itching to play in front of a raucous LSU crowd.

“I think Arkansas will definitely win the series, and I’m hoping for a sweep.”

The coaches and athletes from Arkansas’ teams in Baton Rouge this weekend won’t be able to attend each other’s events, but Chris Bucknam — the Razorbacks’ men’s track and field coach — said they’ll be rooting for each other.

“Hopefully it’s a good, successful weekend for everybody,” Bucknam said. “Obviously we’re dialed in on the track, but certainly we’re proud of our women’s team, and the baseball and softball teams and all they’re doing. Just hope it’s a clean sweep for all of us.”

The Arkansas men’s golf team finished second to Vanderbilt at the SEC Championships last Sunday in a match that went down to the final hole.

“Coach [Brad] McMakin’s golf team was so close this past weekend,” Van Horn said. “We were all following it.

“Our athletic department has had an incredible year. If you’re just talking about wins, academically.”

Van Horn is in his 19th season as the Razorbacks’ coach.

“I think it’s been as good of a year as I’ve seen, and I’ve been here a long time now,” Van Horn said of all the sports teams’ achievements. “It’s been fun to be a part of it.”

Bucknam said he was proud watching the golf team’s performance at the SEC championships.

“We’ve all got each other’s backs,” Bucknam said.

“I’ll wear a Razorback shirt when I’m at the gym or out and about, and I’ll hear a ‘Woo Pig!’ every once in a while,” Zimmerman said. “The LSU fans definitely give me a hard time. I hear some boo birds every once in a while. They’ll throw some jabs for sure, but it’s all in fun.

“LSU fans also are very friendly. They’ll offer up some beer and gumbo.”

“Winning is not easy,” Van Horn said. “I tell our players that all the time. It’s easy to be average at this level if you have good players, but winning is tough. You don’t just show up and win. You’ve got to find a way to win and fight to win, and I think that our programs do that.”

“They’re really good,” Van Horn said of Deifel’s team. “Missouri’s really good, too, and [the Razorbacks] struggled a little bit, but they bounced back Monday. That was a huge win.

“Sometimes that just happens. It’s tough to beat people every weekend. I’m happy for them and their program.”