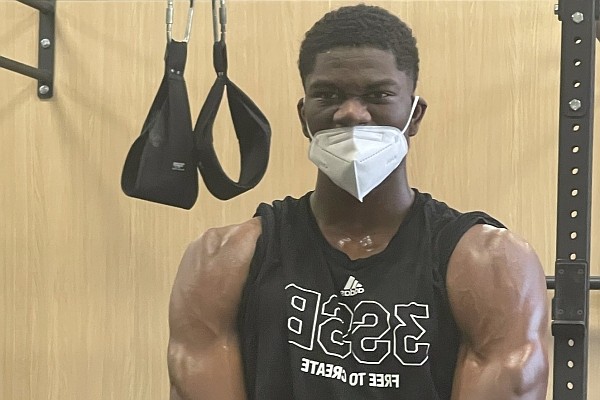 He plays for the Compton Magic program during the spring and summer.

“I think Coach Musselman and his whole staff have been in constant contact and actually shown us they really want him, and I think his style of play fits Kijani,” said Doug Joseph, who coaches the 16-under Compton Magic. “Muss is a hell of a coach. I have some people that have known him for a long time and known his dad. So we trust him.”

Wright and his mother plan to officially visit Fayetteville.

“I think it could be a good fit, but we have to go visit and see if it’s something he could deal with,” Joseph said of Arkansas. “Coming from LA to Arkansas is a huge change.”

Joseph, who is Wright’s godfather, has been a coach for Compton Magic for about 12 years and AAU basketball for about 19 years.

“I have a pretty good feel who the coaches are and what they’re about and their philosophies, so we can dig through all the fluff to get to the actual thing we’re looking for,” he said. “Eric has shown us that. Kijani is a priority. So we’re going to take a really, really serious look at that.”

Pete Davis, a former Michigan State and NBA point guard who played for Musselman’s father Bill with the Cleveland Cavaliers, has known Joseph for 25 years and has mentored Wright.

“Kijani is a man amongst boys … he’s a major-league rebounder, has a hard hat, lunch pail work ethic,” Davis said. “[He can] take over a basketball game in the paint, putting opposing teams’ players in foul trouble.”

ESPN national director of recruiting Paul Biancardi ranks Wright the No. 2 power forward and the No. 16 overall prospect for the Class of 2022.

“Wright is a physically imposing big man whose calling card is his rebounding,” Biancardi said. “At times he can be relentless on the glass as he possesses sure hands to secure to finish the play. His offensive game is developing in terms of touch and footwork. A capable face-up jumper from 15-17 to knock it down and gets excellent leverage and angles inside to score.”

If Wright signed with Arkansas, he would tie for the highest-rated prospect in the ESPN rankings to do so with the Razorbacks. Former Arkansas forward Bobby Portis also was the nation’s No. 16 recruit back in 2013.

“The last Razorback that comes to mind with this type of front court talent is Bobby Portis,” Biancardi said.

Wright started all six games for the 2019 USA U16 National team that went undefeated and won a gold medal in Belem, Brazil.

“You could see the talent,” Joseph said. “The talent jumps out to you when you see him playing. When you see him in general, just his physical makeup is something you’ve never seen before.”

“I just think he’s easy to talk to and he’s a super nice guy, he’s a family,” Joesph said. “He’s all about the team. Playing together and working as a unit. I think all that stuff identifies with Kijani.”

Wright plans to visit his other six finalists, too.

“We’re going to do maybe three or four in June and the rest in July,” Joseph said.

Joseph said the trip to Arkansas will probably come in July, and a decision will come soon afterward.

“Right at the end of July, right at the beginning of August, he’s going to make a decision so he can get it out of the way and enjoy his senior year,” Joseph said.