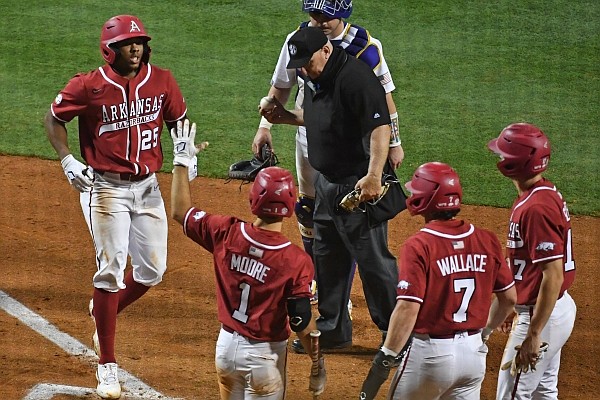 Arkansas center fielder Christian Franklin runs toward teammates after hitting a home run during a game against LSU on April 30, 2021, in Baton Rouge, La.

Arkansas and LSU will play a doubleheader Saturday beginning at 2 p.m.

The second game will begin either at 6:30 p.m. or one hour after the conclusion of the first game. Both games will be nine innings and will be streamed by SEC Network-Plus.

The No. 1 Razorbacks defeated the Tigers 7-0 in the opening game of the three-game series Friday.

According to the National Weather Service, there is a 100% chance of showers and possibly thunderstorms Sunday afternoon in Baton Rouge, La. Saturday’s rain chances are lower, between 10% and 40% during scheduled game times.

It will be the fourth consecutive weekend Arkansas will play a doubleheader. The Razorbacks (33-7, 14-5 SEC) split doubleheaders at Ole Miss and South Carolina, and swept a doubleheader at home against Texas A&M.