The hole-in-one that wasn't 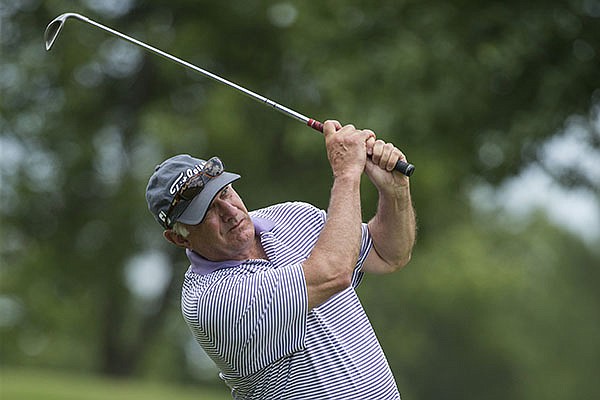 When is a hole-in-one not a one? That is an oxymoron.

Yes, I know the answer. Your first goes in the lake, the next in the cup. It’s a smooth three.

My father wouldn’t claim his first and only ace at age 68. Instead of walking 8 more yards up a steep hill, his group played from the ladies tees at the cart turnaround. C.W. Keopple wrote 1 on the scorecard. That’s all I needed for confirmation. None competed as fiercely as Keopple.

My dad was a stickler for the rules of golf and said it can’t be a hole-in-one if it was not from his appropriate tee.

I’ve now got something similar, an ace that I could never count. It came Monday at Big Creek Country Club’s 13th. This one at my Mountain Home club has several more asterisks than my father’s non-ace.

First, it was not at the marked tee box. Second, it was purely practice, part of my own personal demo day courtesy of Big Creek head pro Todd Dunnaway.

Dunnaway is my pro for another month, soon to be general manager and head pro at Paradise Valley Athletic Club in Fayetteville. He’s been at Big Creek the last seven years.

I hate you, Al Sexton. Just when I was getting close to a wonderful pro, Sexton snatched him away.

I’m happy for Dunnaway, a Rogers native once again close to family. I’m also thrilled for many good friends. I know hundreds of PVAC members. They are getting a pro who knows the golf swing and how to fit clubs. He’s also a good listener.

My first problem with Dunnaway came last week. He played into my love of the old blade irons from my youth. I think he knew what I needed, the new forged irons. Several top club makers are now marketing them with fast ball speeds.

Blade irons to me are just beautiful. It’s what I grew up hitting. Those were the days when I could fire a 1-iron at a pin and often pull it off.

Once with a 2 handicap, I won some college tournaments in the old Arkansas Intercollegiate Conference as a junior at Central Arkansas.

My college irons were McGregor Tourney blades. Years later at a football coaches outing at Oklahoma State, I was paired with golf coach Mike Holder. He handed me the early models of PING Eye-2 irons with implicit instructions.

“Hang those blades on the wall as a collector’s piece,” he said. “You can no longer hit that tiny sweet spot. None of my players are hitting those now. The Eye-2 is changing the game.”

With two babies in diapers, I told Holder that I could not afford them. He called my boss, Tulsa World sports editor Bill Connors. He got permission to send me used Eye-2 irons. I’ve hit them ever since.

Two weeks ago Dunnaway was on the practice tee with the PING rep for a demo day when I was working on my putting. They both waved me down. The plan was to see what I could do with my old Callaway No. 2 metal fairway club. Trackman was set up.

The PING 3-woods outdid my 20-year-old club by a bunch. As I was walking away, the PING rep asked about my irons. Told I would never change from my old Eye-2 irons, he said, “You are one of those. Go get your 7-iron and let me show you what you are missing.”

I thought he was going to hand me deep cavity back irons. Instead, he and Dunnaway conspired to put an i210 blade in my hands. All of the new irons are de-lofted a bit so it’s going to go further. But I was stunned at what I could do with a tour-quality iron.

“You hit the ball in the center of the face,” the PING rep said. “You can hit these. And hang those PING Eye-2 on the wall.”

I'd heard that before.

Stunningly, I could. I didn’t buy them on the spot because Dunnaway had warned were more Demo day in coming weeks. Plus, he had a Mizuno fitting kit in the shop. Would I like to try them?

I was back at the club a few days later and Dunnaway suggested I take a few 7-irons on the course for my own practice session. I couldn’t go to the range. It was too wet. It’s really a better option to be aiming for a pin on a green with exact yardage.

So I headed to a wide open back nine with the idea that I’d play iron shots from the tee and again from the fairway. I took out six new golf balls, looking for quality control.

For starters, I hit Callaway Apex and Mizuno JPX921. The Callaway had a shaft built for extra elevation.

Playing the 10th and 11th into the wind, the shots from the Apex were too high and fell from the sky quickly. It was better with the Apex when I turned downwind on the 12th. But the JPX921 had a driving trajectory into the wind, perfect. And, it was long. Down wind, it was a gorgeous shot.

My swing clicked pretty quickly and I started to get a dense pattern on the 12th. I played it as a 320-yard hole. Two 7-irons did it. I hit eight balls in the fairway and all of them on the green (although one trickled over).

Then, there was the par three 13th, a fun downhill shot that was down wind.

I found the 7-iron distance with my range finder, a 160-yard. I was between the ladies and men’s tees with my six balls.

The first shot was my only miss, a little heavy and 10 yards short. The second was high and true, about 10 feet away. The third — with Dunnaway headed my way in a cart — hit just short of the hole and disappeared. I was sure it stopped in a depression, on the green but not in view. I hit five more, all solid.

Dunnaway asked about the shot pattern and the club used. I held up the Mizuno. He took it and handed me a Tour blade Mizuno and said he wanted to put his favorite shaft in the JPX921.

“It’s the shaft I have in my irons,” he said. “I think you will like it. It’s got more stability. It’s going to tighten up your pattern, but you should hit these blades, too.”

When I got to the green, I counted five golf balls, one of them long in the bunker. It was then it hit me that I’d put one in the cup.

The rest of the back nine was pretty solid. I think I hit close to 130 7-iron shots with four different clubs, all good. Two different Mizuno blades were not a stretch.

When I got back to the shop, Dunnaway smiled when I told him he’d witnessed an ace without really knowing it.

Two days later on the practice tee, I hit a half bucket with the JPX921 with Dunnaway’s favorite shaft. It was amazing.

I’m in the process of ordering new irons. I’ll be playing the Mizuno JPX921. I think my pro knew I’d pick them all along. He let the way my golf ball behaved decide it. Thank you, Todd Dunnaway and good luck.

I’m not sure how many 7-iron shots it will take to get from Big Creek to PVAC, but not as many as before the JPX921.