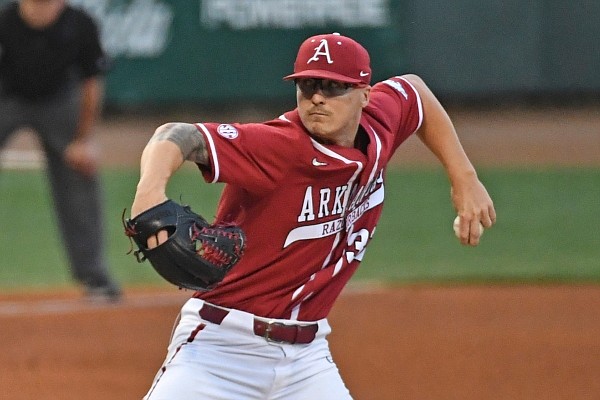 Arkansas pitcher Patrick Wicklander delivers a pitch during a game against LSU on April 30, 2021, in Baton Rouge, La.

"Patrick Wicklander was outstanding, very efficient," Razorbacks coach Dave Van Horn said. "Just attacked them. They like to swing, and they swung."

Wicklander struck out 5 LSU batters, gave up 3 hits, and didn't walked 1 batter in his outing.

"What was working for him was his fastball," Van Horn said. "He threw 67 pitches and 87% of them were fastballs."

Arkansas (33-7, 14-5 SEC) was no-hit through six innings by LSU starter Landon Marceaux. But Matt Goodheart led off the seventh inning with a single, then Christian Franklin drove in the Razorbacks' first runs with a one-out single to right that scored Goodheart and Brady Slavens to give Arkansas a 2-0 lead.

"I knew he was going to be in the zone," Franklin said. "He hung a curveball and I was able to hit it for a single."

"Just a great job of Franklin doing what you’re supposed to do with an offspeed pitch, especially when you’re down in the count," Van Horn said. "Just hit it right back where it came from."

Arkansas added five runs in the eighth inning behind a two-run single from Slavens and three-run home run from Franklin.

"On a normal day, that ball goes way out of here, but the wind got a hold of it a little bit and kept it from going probably another 30-40 feet," Van Horn said of Franklin's home run. "But he just did a good job getting a fastball 3-1 and hammering it."

Arkansas closer Kevin Kopps was brought in with two outs in the seventh inning. He struck out the first four batters he faced and didn't allow a hit in 2 1/3 innings in relief.

In total, Kopps struck out five batters and threw 20 of 29 pitches for strikes.

LSU (25-16, 6-13) had just three baserunners and one was thrown out trying to run first to third on a single to Franklin in center field in the seventh inning.

The Tigers and Razorbacks will play a doubleheader Saturday. The first game is scheduled for 2 p.m and the second will begin either at 6:30 p.m. or one hour after the conclusion of the first game.

Both games will be nine innings and will be streamed by SEC Network-Plus.

Kopps comes on and gets a groundout to third, groundout back to the pitcher and then a strikeout to end the game.

Arkansas goes 1-2-3 in the 9th. Kopps back out to see if he can shut down the Tigers.

Kevin Kopps gets three strikeouts in the 8th. He has struck out every single batter he has faced today.

Jacob Hasty in to pitch for Marceaux.

Hasty gets Webb to strikeout to start the 8th.

Battles singles and then Nesbit grounds out to third, Battles advances to second.

Battles gets to third on a wild pitch.

Wallace walked to load the bases.

.@brady_slavens got the party started with a two-run single.

Franklin hits one a long way to left field and that's going to leave the yard. Now Arkansas leads 7-0.

Moore strikes out to end the inning.

Wicklander gets the first out inning on a deep fly ball to right.

Wicklander gives up just his second hit of the game and LSU has the tying run at the plate.

Doughty singles to right-center. Franklin comes up firing to third and the runner, Dugas, is thrown out at third.

Wicklander's day is done and Kopps is coming in to pitch.

Kopps shuts the door on LSU by getting a three pitch strikeout.

Goodheart gets Arkansas' first hit of the game to right-center field.

Wallace pops up to the shortstop for the first out of the inning.

Slavens gets ahead 3-1 and makes Marceaux pay as he singles right back up the middle. Goodheart goes from first to third to give the Razorbacks their first runner in scoring position this game. Slavens advances to second on the throw.

Franklin waits on a breaking ball and singles to left-center field. Both runners score and the Hogs lead 2-0.

Moore follows by hitting into a double play to end the inning.

For the fifth time this game Wicklander sets down the Tigers in order. He adds another strikeout, and gets a groundout and pop up to Smith at third to end the inning.

Arkansas gets another base runner on an error by the third baseman, but Battles strikes out. Smith was then thrown out at second on a failed hit and run. Gregory grounds out to the pitcher to end the inning.

Wicklander gets a strikeout, a flyout to left and a pop up behind the plate that Opitz catches right up against the backstop to end the inning.

Arkansas is still hitless against Marceaux. He gets three groundouts to end the 5th inning.

LSU gets its first base runner of the game on a hit that didn't leave the infield. It was a high hopper to Smith, and he waited on it before fielding it, and the runner was safe.

That was all LSU could do though in fourth as Doughty flies out to right.

Marceaux gets two more strikeouts to run his total to seven. Wallace grounded out as well in the inning. Marceaux has all of his pitches working right now.

Wicklander gets his second strikeout of the game after falling behind 3-0.

The next two batters fly out to right to end the inning. So far so good for Wicklander. He's looking good and locating pitches.

Marceaux gets another strikeout and a flyout before the first runner of the game reaches on an error by the third baseman. Battles advances to second on the throwing error.

After a long delay to figure out whether Gregory was hit by a pitch or not, they determine he wasn't. It looked like it did on the replay, but hit by pitch is hard to overturn in replay. Gregory then grounds out to the first baseman to end the inning.

Wicklander gets out of the inning with just four pitches. Two first pitch swings and then a flyout to center on a 1-0 pitch ends the inning.

Marceaux strikes out two more Razorbacks and then gets Moore to groundout to short to end the inning.

Wicklander gets the help of a great diving catch from Cayden Wallace in right, and he retires the Tigers in order.

He got a strikeout and a groundout to go with the flyout.

More proof that Hogs can fly.

Arkansas goes in order in the first inning. Gregory and Wallace struck out. Matt Goodheart hit a ball in the hole that the second baseman fielded and threw Goodheart out by a step. It was a really good play.

Arkansas has lost seven consecutive series at LSU and is looking for its first series win in Baton Rouge since 2004. The Razorbacks have not won any of five series played at the new Alex Box Stadium, which opened in 2009.

Arkansas starter Patrick Wicklander allowed 1 run on 2 hits in 7 innings last week at South Carolina. Wicklander did not walk a batter for the second time in 25 career starts.

LSU is led offensively by a pair of freshmen, right fielder Dylan Crews and first baseman Tre’ Morgan. Crews has a .362 batting average and 10 home runs. Morgan bats .358 and leads the Tigers with 12 doubles and three triples. The duo has combined for 39 extra-base hits and has been successful in 21 of 26 stolen-base attempts….Crews and Morgan are among five position starters — three freshmen and two sophomores — who are playing their first SEC season for LSU.

LSU has the fourth-worst SEC record, but the Tigers have won five of their last nine SEC games. LSU nearly won a sixth game during that time frame, but blew an eight-run lead in the eighth inning at Ole Miss last Sunday.

LSU is 19-10 at home this season, but just 2-7 at home against SEC teams. The Tigers have lost all three of their home conference series against Vanderbilt, Mississippi State and South Carolina.

Arkansas is 12-3 away from home this season, including 9-3 in true road series at Louisiana Tech, Mississippi State, Ole Miss and South Carolina.