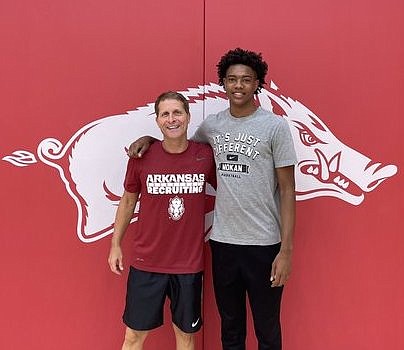 Arkansas 2023 target and ESPN 5-star Bryson Warren’s unofficial visit to Fayetteville on Sunday can be classified as “great."

“The coaches talked about what they see in me,” Warren said. “Just to see the campus and the arena and all the facilities and the equipment they have is nice to see.”

Seeing freshman guard Moses Moody become Arkansas’ first one-and-done after being selected No. 14 overall in the NBA Draft by the Golden State Warriors on Thursday was intriguing to Warren.

“It was definitely cool to see,” Warren said. “I worked out with Moses several times, so just to see him get drafted was amazing. To see him go to Arkansas and be the first one one-and-done is cool to see.”

Seeing Bud Walton Arena and talking to Razorbacks guard Khalen "KK" Robinson were some of the highlights of the trip.

“And just being able to talk to all of the coaches was great,” Warren said.

Warren, 6-3, 162 pounds, of Link Year Prep in Branson, Mo., has seen his stock continue to elevate because of his play this spring and summer with 17-under Mokan Elite. ESPN National Director of Recruiting Paul Biancardi gave Warren his 5-star status on June 29.

Arkansas Coach Eric Musselman and the staff showed Warren how he would fit into the program.

“They see me being that playmaker for them,” Warren said. “Come off screens, reading, being that coach on the floor. One thing I did like was they do everything NBA style. Even like asking questions you might get on draft day. They go over that with you, which is great because that’s where I’m trying to get to – the next level.

"That’s what I have to be ready for.”

He averaged 24.1 points, 3.5 rebounds, 3.7 assists, 2.2 deflections and 2.5 steals per game as a sophomore at Little Rock Central. He has offers from Arkansas, Auburn, Oklahoma, Missouri, Tennessee, Kansas, Maryland, Ole Miss and numerous other programs.

ESPN also rates him the No. 4 point guard and the No. 15 overall prospect in the 2023 class. Warren was the first sophomore to be named Arkansas Basketball Coaches Association Overall Boys Player of the Year in the organization’s eight-year history.

He plans visits to Tennessee, Auburn, Missouri, Oklahoma and Oklahoma State over the next few weeks.

At the end of the visit, the entire coaching and support staff walked Warren and his family to their car. He said the visit was a plus.

“It definitely puts them in my head,” he said. “I’ll definitely be back for a game, but to get all this love is cool.”