It is curious how quickly super SEC formed 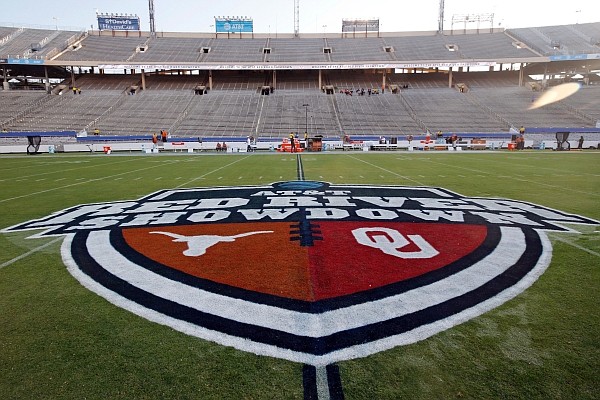 In this Oct. 10, 2020, photo, The Red River Showdown logo is displayed on the field of the Cotton Bowl, prior to an NCAA college football game between the University of Texas and Oklahoma, in Dallas. (AP Photo/Michael Ainsworth, File)

Nine days after “being interested,” the schools were extended and accepted an invitation to become full-fledged members in 2025.

That leads us to believe that not even the coronavirus could slow down the negotiations that obviously began last year.

One might even believe the SEC’s new 10-year, $3 billion contract with Disney, which begins in 2024, was predicated on the Longhorns and Sooners joining the league.

Texas and Oklahoma are top-shelf programs. Historically they are top-10 teams and programs

Everyone is familiar with the legacy of the Longhorns, which hasn’t been as strong recently. At Oklahoma, Lincoln Riley, Bob Stoops, Barry Switzer, Bud Wilkinson and Chuck Fairbanks have kept the Sooners winning.

That’s a who’s who of hall of fame coaches.

The merger of two great historical teams into the SEC is going to forever change the landscape of college football. It’s the first super conference with teams that have won many national championships, and they will again.

As stated in a previous column, it may take a few years to see how this shakes out for the Arkansas Razorbacks.

Some fans are excited. Some not so much.

The whole thing feels like it was a “vote them in or find somewhere else to play” situation.

The Big 12 obviously is in trouble.

Unless it can get Ohio State, Michigan and Notre Dame to join up — and that’s not happening in a million years — the conference will be looking at Houston, BYU and Memphis to keep them a Power 5 conference.

That unfortunately won’t do it.

The Big 12 is crying that ESPN was in cahoots and is offering more TV exposure to some of the remaining eight if they join the American Athletic Conference, which has offices in the Dallas area.

That would be a way to implode the Big 12 and allow Texas and Oklahoma to join the SEC sooner and without each paying $76 million to do so.

So it is highly doubtful that it will take four years before the Red River Rivalry is a regular-season SEC game.

Anyone who thinks ESPN wasn’t at least consulted about the Longhorns and Sooners joining the SEC hasn’t been paying attention the past 20 years.

ESPN is the most powerful sports entity in the world.

If by 2023 Texas and Oklahoma are part of a 16-team SEC, look for the league to start playing 10 conference games.

Last year’s pandemic schedule of 10 conference games was not a fluke.

ESPN hasn’t been happy with all the directional schools that end up in its main programming or on the SEC Network.

The SEC has a rule that each school is supposed to schedule at least one quality nonconference game a year. With a 10-game conference schedule, that would no longer be necessary.

Apparently no decision has been made about divisions or pods, but look for the Razorbacks to play both Texas and Oklahoma every year because it is a geographical fit in the expanded SEC footprint.

However it breaks, most likely it won’t be best for the Razorbacks right now.

Arkansas has been through some tough seasons, much tougher than Texas, and it is digging itself out of a deep hole.

The Razorbacks need stability, a plan and a strong work ethic. They found all of that in Sam Pittman, who was hired in about the same length of time it took for Texas and Oklahoma to leave the Big 12 for the SEC.

Still, the most amazing thing about the whole ordeal is that it was kept secret in today’s world.