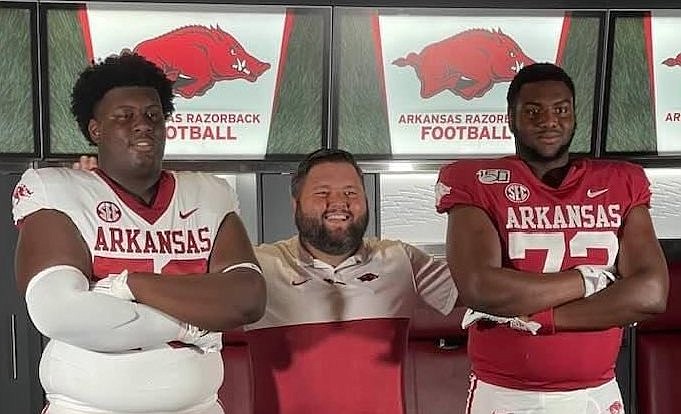 When you have a player like Arkansas offensive line commit E’Marion Harris in the fold, Joe T. Robinson High School should and does have lofty expectations.

Harris (6-7, 370 pounds) was one of many commits and recruiting targets in Fayetteville on Saturday for the Razorbacks' recruiting picnic.

Harris and fellow offensive line pledge Andrew Chamblee (6-6, 280) of Maumelle got to together for a picture Saturday with new Arkansas offensive line coach Cody Kennedy.

Harris' and Chamblee's teams are scheduled to meet at Maumelle on Sept. 3.

“He’s pretty cool,” Harris said of Chamblee. “ We don’t really talk much. But, hopefully, we can get a great bond.”

“That is a pretty package right there,” Maupin said. “They are both long and have great frames and move well and from the state. You can’t ask for much more.”

Harris, who chose Arkansas over Alabama and others, is glad to have his recruiting out of the way and is clear about his goal for his senior season.

“It feels good,” Harris said. “That’s something that I don’t got to worry about.

"Personally, I want to go to the state championship. I feel like me and my team can do that.”

Robinson, which won the Class 4A state title in 2019, finished 8-4 last season and lost 23-20 at Stuttgart in the second round of the state playoffs.

The Senators have just three starters returning on both sides of the ball, but Maupin expects his squad to be a title contender again this season with Harris leading the way on both offense and defense.

Hooten’s Arkansas Football magazine has Joe T. Robinson to win its conference and ranked fourth overall in Class 4A.

“It’s (the offseason) been really good and encouraging to see kids like E’Marion take that next step to dominance,” Maupin said. “That’s what you want to see when you have a high school kid like that who is obviously incredibly gifted. You want to see it grow into dominance.

"It’s really encouraging the direction of the team and kids like E’Marion.”

Maupin, whose team is scheduled to open its season Aug. 27 against Pulaski Academy, believes there is talent ready to step in.

“I think the most exciting about this year’s group is that it is more unproven guys, but we have kind of built this culture where it is a kind of wait your turn, kind of an Alabama kind of thing,” Maupin said, “where you know when it is your time to shine, you are a really good player.

“Just because you haven’t been playing since you sophomore year, it’s not because you weren’t good, it’s because everybody is good.

“I am excited for these kids to be able to make a name for themselves now because they have worked really hard and supported the upperclassmen. I am ready for the guys around the state to learn who these guys are because we have some good ones.”