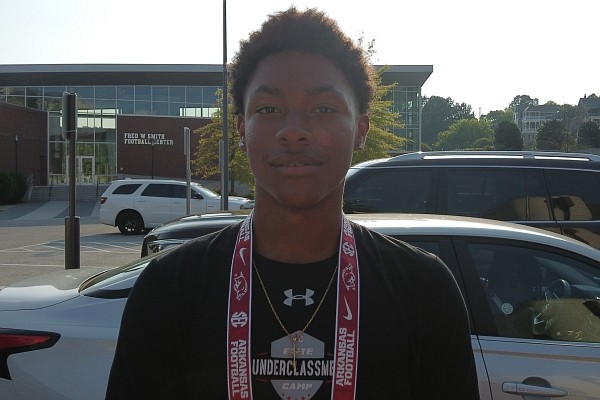 Prospects beyond the borders of the Natural State often have low expectations before visiting Arkansas only to be shocked after a trip to Fayetteville.

"When you think of Arkansas, you're like, 'I didn't know what it was,'” Waseem said. “I came down here and it blew my mind."

He revealed what blew his mind about the trip.

"The facilities. The environment, because I didn't think Arkansas had people like that,” he said. ”The environment when they played the video of all the fans going crazy, that's really what blew my mind."

Waseem had 42 catches for 763 yards and 11 touchdowns as a sophomore at Wekiva High School in Apopka, Fla. He said Arkansas is now in the mix for him.

"Before I came here, I really didn't think too much of them,” Waseem said. “Now, they blew my mind, so they're basically up there with all the schools."

He said Arkansas compares well to the other schools he’s visited.

"This is one of the hardest ones. I liked it a lot,” Waseem said.

Special teams coordinator Scott Fountain recruits the Orlando area and has been in touch with Waseem and Baxter.

"Coach Fountain, he's a cool dude,” Waseem said. “He recruits our area, so I can tell he's one of the good coaches. You know coaches sometimes are phony, but I can tell he's real.

"And the receivers coach (Kenny Guiton), he taught me a lot of things."