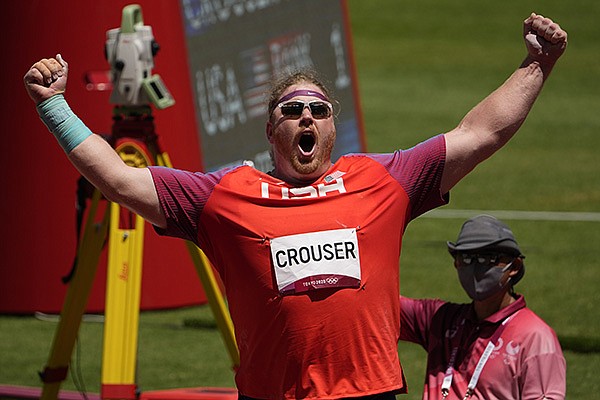 Ryan Crouser celebrates in the final of the men's shot put at the Summer Olympics, Thursday, Aug. 5, 2021, in Tokyo. (AP Photo/Charlie Riedel)

TOKYO — Ryan Crouser broke his own Olympic record on his way to defending his shot put title Thursday on a hot day in Tokyo.

On his last attempt, Crouser went 76 feet, 5 1/2 inches to earn the first track and field gold medal for the American men at the Tokyo Games. U.S. teammate Joe Kovacs finished second and Tomas Walsh of New Zealand was third.

Crouser became the first American to win back-to-back Olympic golds in the shot put since Parry O’Brien did it in 1952 and 1956.

It was the second-best mark of all-time surpassed only by the world record set earlier this summer by Crouser — who lives and trains in Fayetteville and is a volunteer assistant coach at the University of Arkansas.

In the heat at Olympic Stadium, Crouser took the lead on his first attempt and saved his best for his final one. He clapped his hands — sending chalk dust into the air — and celebrated. He even donned his cowboy hat for the occasion.

His family and friends gathered for a watch party in Redmond, Ore. Wearing “Crouser” shirts, they let out the largest cheer of all when the commentators announced those magical words: “Gold Medalist.”

He was competing with a heavy heart after his grandfather recently died. On a piece of paper, Crouser had a heartfelt message: “Grandpa. We did it. 2020 Olympic champion!”

Crouser’s winning mark broke his Olympic record of 73-10 3/4 he threw in 2016 in winning the gold medal in Rio de Janiero.

In December 2019, Crouser moved from San Diego to Fayetteville to train, and he became a volunteer coach for the Razorbacks.

The reason for Crouser’s move was Mario Sategna — his coach at the University of Texas — being hired as an Arkansas assistant coach.

Sategna resigned at Arkansas in May after the SEC Outdoor Track and Field Championships, but Crouser is still listed as a staff member on the UA website.

Crouser began 2021 with a bang on Jan. 24 by breaking the world indoor record in his first meet of the year when he had a throw of 74-10 1/2 at an American Track League competition held at Arkansas’ renovated Randal Tyson Center. He broke the record of 74-4 1/2 set by Barnes in 1989.

“It’s a pretty good start to 2021,” Crouser said at the time in an interview with ESPN. “I feel like there is more there.”

“I was celebrating on that one almost before it left my hand,” Crouser said then.

Bob Holt of the Arkansas Democrat-Gazette contributed to this article.