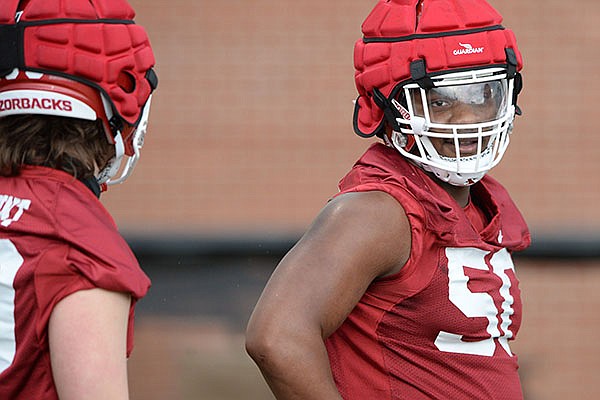 The Razorbacks’ second-year coach rattled off the names of three former in-state high school standouts — Isaiah Nichols of Springdale, Zach Williams of Little Rock and Jashaud Stewart of Jonesboro — and Eric Gregory, the team’s leading returning tackler among frontline players. But those starting jobs are far from secure.

Competition along a deeper defensive line and who wins those position battles are among the bigger stories to follow during Arkansas’ training camp, which begins Friday.

Pittman is hopeful the Razorbacks can become comfortable playing with a four-down front this fall after showcasing a 3-2-6 look out of necessity for much of 2020.

Pittman said Thursday that those up front have gotten much bigger during the offseason through work with the strength and conditioning staff and nutritionists. He singled out Williams, who last season played in the 225-to-228-pound range and now weighs roughly 260 pounds.

In the spring, Stewart received praise for his effort and motor and rose up the depth chart. Nichols, who was injured in spring drills, finished with a career-high 24 tackles last season.

Pushing the top four for playing time is a host of capable options.

Pittman began with Dorian Gerald, Mataio Soli, Taurean Carter and Marcus Miller, then added freshman Cameron Ball has impressed during the summer with his athleticism. Not wanting to put too much pressure on the freshman, Pittman stopped short of going into detail on Ball, but added that he has a chance to contribute right away.

Transfer portal additions Markell Utsey and Tre Williams of Missouri and John Ridgeway of Illinois State should factor heavily into the competition as well. Utsey and Williams have prior SEC experience at Missouri, and Ridgeway is a physical and edgy tackle.

“I could go on and on about specific guys as far as their weight gain and their strength gain,” Pittman said. “That room’s got to get better. They know it. The first thing they have to be is consistent in their work ethic. I think they’re getting better.

“They need a leader in that group that’s going to lead by example, and hopefully we’ll find that from (Friday) on.”

Pittman said success with a four-man front would include opposing offenses playing behind the chains on second down, consistently getting off the field on third down and bettering a yards-per-rush-allowed average (4.62) that ranked 10th in the SEC last year.

He also made it clear that starting jobs and spots in the rotation will have to be earned prior to the scheduled season opener against Rice on Sept. 4.

“Last year we played lot of three down because that’s what we had,” Pittman said. “Hopefully we can get into a more four-down defense. The way we practice is we have two fields going basically all the time, so I think we’re going to be able to find out who we have fairly fast.

“And certainly we’re not going to bring in a guy from the transfer portal that we’re going to start Day 1. But if he’s good it might be Day 2.”