Atwater, Johnson among 20 enshrined in Canton 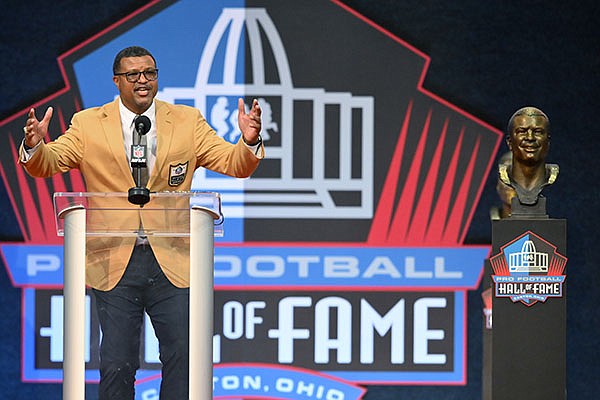 Steve Atwater and Jimmy Johnson were among 20 men enshrined in the Pro Football Hall of Fame in Canton, Ohio — members of the 2020 class whose inductions were postponed by one year due to the covid-19 pandemic.

Atwater and Johnson were two-time Super Bowl champions and among the most recognizable football figures of the 1990s.

As a head coach, Johnson led the Dallas Cowboys to back-to-back Super Bowl wins to end the 1992 and 1993 seasons. Atwater won consecutive Super Bowls as a safety for the Denver Broncos in 1997 and 1998.

Atwater and Johnson became the fourth and fifth former Arkansas players to be enshrined in the Hall of Fame, alongside Lance Alworth, Dan Hampton and Jerry Jones, the Cowboys’ owner who hired his former college teammate Johnson away from the University of Miami in 1989.

Johnson was the first football head coach to win a college national championship and a Super Bowl.

With speeches limited to eight minutes apiece, neither Atwater nor Johnson made much mention to their playing days at Arkansas — Johnson from 1962-64 and Atwater from 1985-88.

Atwater’s speech focused little on himself and more on dozens of individuals who helped him during his career. He referred to his Arkansas head coach, Ken Hatfield, and former Razorback assistants Bobby Trott and Fred Goldsmith as coaches who helped him in Fayetteville.

Hatfield, who also played alongside Johnson and Jones on the Razorbacks’ national championship team in 1964, was in attendance.

Atwater signed with Arkansas as a Wishbone quarterback from Lutheran North High School in St. Louis, but transformed into a hard-hitting safety who was three times a All-Southwest Conference and was an All-American as a senior in 1988.

Atwater had 229 career tackles and holds the Arkansas program record with 14 career interceptions. He played on four bowl teams that had a combined record of 38-11 and won the SWC in his final season.

Atwater was an eight-time Pro Bowler during an 11-year pro career that included 10 seasons playing for the Broncos. Denver selected him 20th overall in the first round of the 1989 draft.

In Super Bowl 32, Atwater made two key defensive plays — a strip sack of Green Bay Packers quarterback Brett Favre and a fourth quarter pass breakup — to help the Broncos win their first Super Bowl championship. Denver repeated as champions the following year with a Super Bowl victory over the Atlanta Falcons in Atwater’s final game with the organization.

Atwater spent his final season playing for the New York Jets, then retired after signing a ceremonial one-day contract with the Broncos following the 1999 season.

Louis Riddick, a former NFL safety who served as one of ESPN’s analysts for Saturday’s enshrinement ceremony, called Atwater “one of the great big safeties of all time.” Atwater developed the nickname “Smiling Assassin” during his NFL career and is perhaps best known for a collision with Kansas City Chiefs running back Christian Okoye during a 1990 Monday Night Football game.

“As someone who played during the ‘90s, this is a guy who I looked up to,” Riddick said. “He’s one of the contemporaries and someone who changed the game with his physical style of play.”

Johnson said during his speech that he began to compile a list of people to thank, but abandoned the idea when he came to the realization it would include too many of his former coaches and players. One of the few relationships he spoke directly about was the one with Jones.

According to Johnson, before Jones bought the Cowboys, he told Johnson they would make sports history together.

“You know what? We — we — did make sports history,” Johnson said, “not only for the Dallas Cowboys, but for the NFL. To go from the worst team in the league two years in a row to winning back-to-back Super Bowls and building a heck of a football team, we did it. And let me tell you from the bottom of my heart, thank you, Jerry — thank you for giving me that opportunity.”

Johnson was presented for enshrinement by his Dallas quarterback, Troy Aikman, who referenced the Cowboys’ turnaround from a 1-15 team in Johnson’s first season.

“I think the greatest contribution that Jimmy Johnson had on the game was taking a team that was the worst in the league in 1989…and then three years later being crowned Super Bowl champions,” Aikman said.

Johnson resigned from the Cowboys following the 1993 season, but the team he assembled was one of the best in the NFL for two more years. Dallas lost in the NFC Championship Game in 1994 and in 1995 became the first franchise to win three Super Bowls in four seasons.

“It was one of the most seismic shifts in the NFL…when Jerry Jones hired Jimmy Johnson to replace legendary Tom Landry,” said Chris Mortensen, an ESPN NFL reporter during the network's broadcast. “I asked Jimmy, ‘Were you a better coach, or a better architect?’ He agreed he was a better architect than he was a coach, and he was a darn good one at that.”

Johnson finished his professional career with an 80-64 record in nine seasons. He took six teams to the playoffs, including the Miami Dolphins from 1997-99.