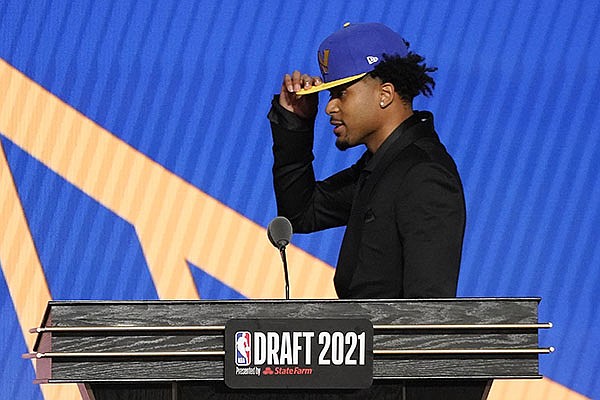 Moses Moody poses walks off the stage after being selected 14th overall by the Golden State Warriors during the NBA basketball draft, Thursday, July 29, 2021, in New York. (AP Photo/Corey Sipkin)

Of the 60 draftees in the 2021 NBA Draft, 21 prospects in the top 100 of the 2020 class were selected with former University of Arkansas guard Moses Moody outperforming his ranking more so than any other recruit in his class.

Moody was the lowest-ranked ESPN prospect at No. 45 nationally to be selected as a lottery pick and the second lowest to be picked in the two rounds. The No. 14 pick of the Golden State Warriors, Moody was Arkansas’ first one-and-done player in school history.

ESPN national recruiting director Paul Biancardi projected the 6-foot 6 Moody to be selected in the first round.

“He worked his way into the lottery because I think what he did at Arkansas caught the eyes of the NBA scouts,” Biancardi said. “They love length on the wing. He’s not overly explosive but he’s pretty smooth and his greatest strength is the catch and shoot jump shot. He’s a better playmaker than people realize.”

While Alabama guard Joshua Primo was the No. 12 pick in the draft and was an ESPN 4-star, he wasn’t ranked in the top 100 because he attended Royal Crown Academic School in Toronto.

The only other lower-ranked prospect in the 2020 class to be drafted was Auburn forward JT Thor, who was the No. 37 overall pick. ESPN rated him the No. 50 prospect nationally.

“Muss is this type of guy, if you love the gym and you love to work, you’re going to get better,” Biancardi said.

Biancardi, who’s top six ranked prospects in the 2020 class were the top seven picks of the draft said Moody’s makeup as a person helped him maximize his talent and development.

“He became a lottery pick and became one of the best players in the NBA,” said Biancardi of Mitchell.

Biancardi was named Horizon League Coach of the Year in 2004 while the head coach at Wright State. He was an assistant at St. Louis, Ohio State and Boston College. Before his coaching career, he played for NBA veteran coach Tom Thibodeau at Salem State.

Thibodeau worked for Musselman’s father Bill as an assistant the first two years when the Minnesota Timberwolves were an expansion team. The younger Musselman joined his father’s staff in year two of the expansion.

“That was a match made in heaven,” said Biancardi of the elder Musselman and Thibodeau. “Because they ate, they slept, talked basketball all the time so you fast forward with Eric. He has his NBA background, he takes it to the college game. He knows exactly what he wants to do and how he wants to do it and he’s going to be grinding you in a good way to make sure it happens.

“So if you accept that and you want that you can hit your best version of yourself, and I think that’s what happened with Moses Moody. If I was a basketball player and Eric Musselman told me what to do, I would take it as gospel.”

Musselman has a 155-53 record in six years as a college coach and has won at least 20 games in each year with a winning percentage of .745 which ranks sixth-best among active Division I coaches with at least five years of experience.

“He knows what exactly what it’s going to take for guys to be the best version of themselves within the team concept,” Biancardi said. “I think that’s important because not only is he helping developing players but he’s winning games and to me that’s special.”

With the additions of Keith Smart as an assistant, former Razorback Ronnie Brewer Jr. as recruiting coordinator and Mike Ekanem as director of player development, the Hogs now have a combined 72 years of NBA experience on the staff.

“I think they probably do a good job preparing these kids for what the NBA is like, not just on the court but what life is like off the court,” Biancardi said. “It’s not as glamorous as people think. He’s [Musselman] been in it, he understands it.”