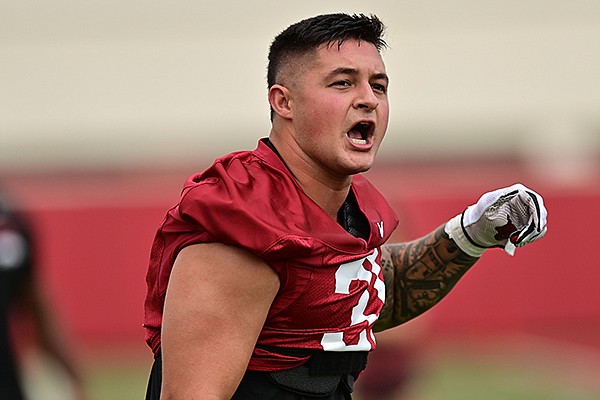 Arkansas senior linebacker Grant Morgan could have easily disappeared into the sunset at the end of the 2020 season.

Instead he chose to saddle up again for the Razorbacks, one of nine players who took advantage of the extra year the NCAA afforded to players who were affected by the covid-19 pandemic.

Morgan's return was due in large part to Arkansas coach Sam Pittman, who Morgan said brought toughness back to the program.

“Pittman, he brought back football like Arkansas is supposed to be, the hard-working, the tough, the physical,” Morgan said. “You go look at any good Arkansas team, like Darren McFadden was fast, but he would run people over...Felix Jones, the same thing.

"It is a simple game. We just have to make it simple and run and hit again.”

Morgan praised the professionalism Pittman brought in his first season leading the Razorbacks in 2020.

“It just shows you well of an organization this is run by Pittman,” Morgan said. "It means a ton to us. All the older guys that came back and decided that we can do it now. To have other guys buy in, like [offensive lineman] Myron Cunningham and other guys, it is a really big step in the right direction.”

Arkansas linebackers coach Michael Scherer said Morgan is the leader of the team, not just of the linebackers.

“Grant makes my job very easy, especially this summer,” Scherer said. “I know if I said ‘Hey, Grant, get the guys together and do this and this and this,’ it is going to get done and done right. That is the same for all the seniors I have in my room. They are just great kids and good leaders, and everyone in the room looks up to him."

“I talked to [Edwards] throughout it and the big thing with him was that he was just trying to find the best possibility for him, the best place to be for him and he ended up realizing it was here,” Morgan said. “He was looked at by other schools, he got offers and he wanted to go do it. His big thing is that he wants to play football for a while. He got his degree and he was looking at other things. The thing for him is he just wanted it to be the best possibility for him.

“He just wanted to be here. I think he...knows that we can be great here.”

For the first time in his six years at Arkansas, Morgan thinks the Razorbacks have depth at the linebacker spots.

“I feel [the media's] job was pretty easy with the linebackers the last four years, because all you talked about was depth,” Morgan said. “That was the truth. It really was. Depth was the hardest part for us.

“I spoke about it many times: we have got to be able to get the ones off the field. If it is by putting different linebackers in or getting off the field on third down efficiency,” Morgan said.

“The fact that we have lot linebackers in right now and the way we are playing at a high level now at every single position in our linebacker group, it really just elevates ability to play. Everyone is stepping up.”