While dreaming about Texas, don't forget about Rice 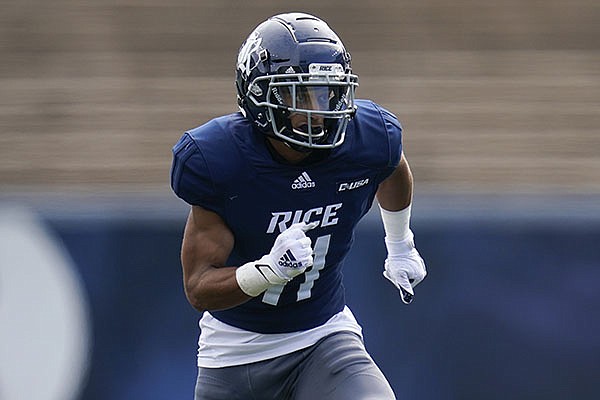 There is too much Texas talk and not enough about Rice this preseason.

I’m partly to blame. I fan the sparks in hopes of a full blaze anytime playing Texas is mentioned. I promise when we first sit down (announcements to come soon) in what may be a weekly sports meeting in Fayetteville, we will first preview the Rice game (and defer Texas talk to the right week).

But at least for a few minutes, turn your attention to the Owls, the scheduled season-opening football opponent for Arkansas on Sept. 4.

It hit me that there was potential to overlook the Owls last week as I drove to a Fayetteville studio for a recording session. The interview was about the history of the Texas series.

The questions were predictable. It was pretty mundane stuff to me because I’ve rehashed this stuff most of my life. It doesn’t take much to get me talking about Texas.

You know my favorite line: It does my heart good when Texas football, Texas basketball and Texas baseball suck.

The folks behind the camera asked about my favorite Texas memories. I mentioned that my mother dug up grass with her nail file from the spot on the field at Memorial Stadium in Austin where Arkansas turned away a two-point pass to preserve a 14-13 victory in 1964.

The grass was replanted and nurtured in our backyard at 36 Westmont Circle in the Meadowcliff neighborhood in southwest Little Rock. Perhaps that patch of Bermuda has spread throughout that neighborhood.

Oh, no, here I go, this is too much Texas talk.

The plan here was to talk about Rice, not Texas. It’s to point out Rice can beat Arkansas one week before the Longhorns come to town. That Sept. 11 game with Texas wouldn’t be much fun if that happens, right?

Because no one has asked me to speak on Rice memories — on radio or otherwise — it’s my job to do it in this space. I actually have horror stories about what Rice can do to an Arkansas season.

How about 1971? The Owls somehow beat the odds with a 24-24 tie against an Arkansas team that would finish second in the Southwest Conference. It cost the Hogs a co-championship with Texas.

But it only got worse. Rice beat the Razorbacks in 1972 and 1973. The 23-20 loss in Little Rock in 1972 came after Rice coach Al Conover threw a chair through a window in the War Memorial Stadium locker room during his pre-game speech.

Conover was an interesting character. He once brought a coffin onto the practice field and encouraged players to bury their mistakes from the previous week’s loss to Texas. A hearse came onto the field during practice and players wrote on cards to put them in a coffin.

It got better a few weeks later when the Owls beat Texas A&M at Kyle Field. Conover failed to find Texas A&M coach Emory Bellard for a post-game handshake. He then shocked everyone by briefly conducting the Aggie Band near the door to the Rice locker room.

The point to all of this: Rice coaches and players are going to be excited to come to Reynolds Razorback Stadium. It’s a great opportunity to throw a chair, conduct the home team’s band.

There is a reason the Hogs are favored by three touchdowns. They have better players, but the best players don’t always win.

Former Arkansas and Rice coach Ken Hatfield likes to talk about the time he took an undermanned team to Austin in 1994. The Owls upset the Longhorns 19-17 and the two teams shared the SWC title.

Hatfield, who coached Arkansas from 1984-89 and Rice from 1994-2005, knows the effort that the Owls will play with in Fayetteville. He also had some insight on the new world of changing conferences.

"Everyone is worried about where they might end up with the realignment," Hatfield said. "That goes for all teams. Rice could use a big moment to take with them into those kind of talks. A school like Rice needs a couple of nice carrots. A victory over Arkansas would be big.

"This is a huge game for Rice. [Arkansas is] an SEC school. I can tell you that Rice has good players, too. They always do."

"You have lots of players getting their first shot at a new position. That makes first games tough," said Hatfield, who last season completed a three-year term on the College Football Playoff selection committee. "Eventually, you work things out and know what a player can do. That goes for both teams.

"We've had our trouble with Rice through the years. So has Texas. The Longhorns often played Rice after they had played Arkansas and Oklahoma, and Rice played better than what you'd seen of them on tape for that game."

The Longhorns lead the all-time series against Rice, 73-21-1.

Arkansas leads the series with the Owls, 35-29-3, but it was a lopsided series for the Razorbacks' final three-plus decades in the SWC.

One of the most famous moments in Rice Stadium history doesn’t have anything to do with football, although some might argue differently. On Sept. 12, 1962, President John F. Kennedy gave a classic speech in Houston that points to why all of us seek lofty goals.

When thinking why Rice should play Arkansas, or anyone in the Power 5, consider Kennedy’s message about space travel:

“But why, some say, the moon? Why choose this as our goal? And they may well ask, why climb the highest mountain? Why, 35 years ago, fly the Atlantic? Why does Rice play Texas? We choose to go to the moon! We choose to go to the moon in this decade and do the other things, not because they are easy, but because they are hard, because that goal will serve to organize and measure the best of our energies and skills, because that challenge is one that we are willing to accept, one we are unwilling to postpone, and one which we intend to win, and the others, too.”

Remember, at the time of Kennedy’s speech, Rice was just coming off a 10-year period in which it went 5-4-1 against Texas.

Rice is considered a tuneup these days. After playing the Hogs, the Owls host Houston before a Sept. 18 date with the Longhorns in Austin. So in at least two of their first three games, the Owls are presented with great opportunities to step on the moon against long odds.

Arkansas can’t overlook anyone. Surely home losses to North Texas and Western Kentucky — teams that are now in the same conference as the Owls — are recent enough to remind that you can’t think about Texas until you get past Rice.