For linebackers, depth concerns a thing of the past 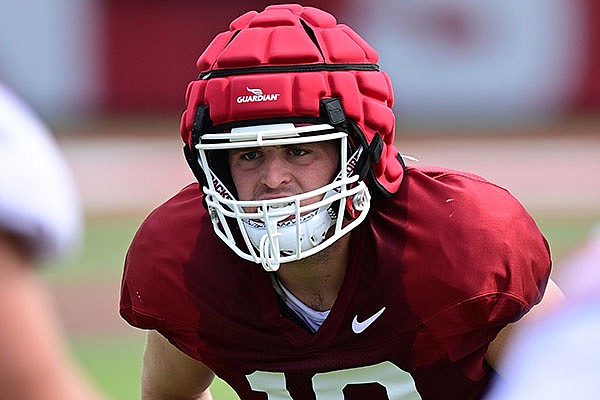 FAYETTEVILLE — Bumper Pool had to come out of the game during the University of Arkansas’ 21-14 upset of Mississippi State early last season.

He didn’t want to, but his broken ribs forced the issue.

“He’s a really tough kid,” linebackers coach Michael Scherer said. “There were times last year when I kind of had to pull him back a little bit, because … he had busted ribs. He missed a game because we had to hold him back because he was banged up so much.”

The missed game wasn’t right after the rib incident.

Pool returned the following week, when the Razorbacks battled No. 13 Auburn down to the wire and would have held on for a 28-27 win if not for an improperly officiated “spike” in the final seconds.

Linebackers At a Glance

ANALYSIS Has there ever been a more veteran linebacker corps in CFB history? Morgan is a sixth-year player, Edwards and Henry are fifth-years and Pool is in his fourth with loads of experience. The group can get better at forceful tackling near the line of scrimmage, being more productive on blitzes and in pass coverage. First-year assistant coach Michael Scherer has talked about featuring more depth, but he’s the one who has to make it happen.

Pool had five tackles in the Auburn game, but it could have been more.

“You can look, there’s a few times — if you watch the Auburn game, there was a few times he met the running back in the hole, a play he makes a hundred out of a hundred, and he’s got him wrapped up and his body just went numb.”

Pool sat out the following week’s 33-21 homecoming win over Ole Miss, but returned the next week at Texas A&M and notched 14 tackles in back-to-back games against the Aggies and Tennessee.

“I felt my strength never finally came back,” Pool said.

To help keep that from happening again, Pool amped up his offseason workouts and put on more muscle.

“This season, I said I won’t let than be an issue,” Pool said. “I want to have that size and strength.”

Pool is one of four senior linebackers for the Razorbacks, who return nine or 10 starters, depending on how they are counted.

Deon “DeDe” Edwards, Hayden Henry and Grant Morgan are all “super” seniors who took advantage of the NCAA’s offer of an extra season of eligibility due to the covid-19 crisis.

Accordingly, the linebacker depth the Razorbacks have struggled to accumulate in recent years, might finally come to fruition this fall.

“We obviously are older now so there’s a good hierarchy, especially with Grant and Hayden coming back, DeDe, Jackson Woodard, A.P. [Andrew Parker], all the guys that are one play away from going in,” Pool said. “We’re excited about the development that they’ve been through and gained throughout the offseason.”

Scherer is stoked about what he sees as high quality depth in the corps, but he’ll have to show it on the field.

Last season, Pool and Morgan (111 tackles) combined for 212 stops while the rest of the linebacking corps totaled 41, including 25 by Henry and 12 by Parker.

“I feel really good about the depth,” Scherer said Wednesday. “Heck, part of me is trying to figure out how to get all of them on the field, trying to figure how they all can help us out because we have a lot of good players.

“You can go 1s, 2s and 3s and all of those guys can play on Saturdays. All of them. And they’ve gotten so much better from last year to the spring to now in fall camp, and they’re still continuing to get better.”

Morgan played most of last season with a bulky elbow brace after injuring his left elbow early in the season.

Now, if situations like Pool’s ribs or Morgan’s elbow occurs again, there should be a replacement ready to rock.

“It eliminates some of the scary situations, like ‘What if this guy goes down what are we going to do?’” Scherer said. “I’ve got another guy. So what’s helped a lot with not only the guys who aren’t the starters, is everyone can see how well everyone is doing right now.”

Said Morgan to the media, “I feel like y’all’s job has been pretty easy for the linebackers the last four years. All you talked about was depth, and that’s the truth. It really was where the depth was the hardest part for us.

The Razorbacks’ all-SEC schedule last season, including added games against Georgia and Florida, the top two teams in the East, made playing depth more difficult at certain positions and linebacker was one.

Scherer was asked what the optimal rep counts would be for the starters.

“We play in a very physical, tough league,” he said. “The greatest thing when I walked into with this room is I have a bunch of kids who have the ability to play at a high level.

“You can go down the list. You have Grant, you have Bumper, you have Hayden Henry, who is playing really good. All three of those guys are playing extremely well right now. Throw DeDe Edwards in there and Andrew Parker, that’s five really solid guys who can go in a game at any time.

“That’ll help provide depth, and as we go throughout the season, it’s going to help everyone in our room out to be able to rotate those guys in the game because we’ll have guys who are fresher.”

The linebacker group has been accounting for interceptions early in camp, with Pool having two in one practice and Edwards nabbing one in a team drill open to the media as well.

Linebackers accounted for one interception last season, but it was a big one. Morgan’s pick and 23-yard return for a touchdown sealed the final score in the victory over Ole Miss, which suffered six interceptions, seven turnovers and was stopped at the 1-yard line in possessions to open both halves.

Perhaps the instinctive nature of the veteran linebackers can produce more takeaways this season.

After one season under Rion Rhoades, the veteran corps is expected to be more dynamic this year under Scherer.

Making impactful plays near the line of scrimmage, taking advantage of blitzing opportunities, and performing better in pass coverage are all areas where the linebacking corps must continue to improve.

The Razorbacks’ young linebackers, like redshirt freshmen Kelin Burrle and J.T. Towers and true freshman Marco Avant and Chris “Pooh” Paul, will need to add weight and be more in sync with the playbook to get on the field. Avant has undergone foot surgery and is rehabilitating it during camp.

Scherer said Burrle needs to continue to work on his body.

“He’s starting to grasp some of the things we’re doing, staring to get an idea of the playbook,” he said. “Once he does that, once you understand the plays, you can transfer over to understanding the offense. … But a lot of it has to do with gaining a whole lot of weight for Kelin.