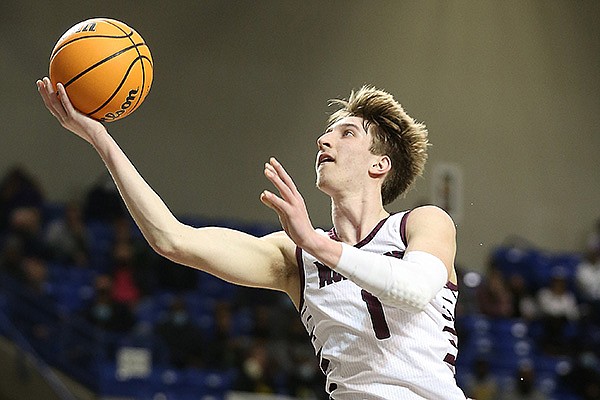 Since Morrilton guard Joseph Pinion committed to the University of Arkansas, he’s been in the ears of others hoping to convince them to be Hogs.

Pinion, 6-6, 180 pounds, of Morrilton, chose the Razorbacks over scholarship offers from Kansas, Baylor, Oklahoma, TCU, Ole Miss, Tulsa, DePaul and others in October.

Pinion and Morrilton defeated Ford and the two-time defending Class 4A state champions 70-64 in the semifinals of the state tournament in March.

“I’m glad he was on board with us,” said Pinion of Ford. “I know he gave us the work during school ball, so I know he’s a great player. He can do whatever he needs to do. I’m really happy he got to join us.”

Pinion is also recruiting ESPN 4-star center Malik Reneau of Montverde Academy in Florida and others.

“I’m just trying to recruit whoever wants to be a Hog,” he said.

Reneau announced a top seven of Arkansas, Florida, Memphis, Florida State, Miami, Seton Hall and Indiana on Aug. 1. Pinion talks up Musselman and his staff’s 72 years of NBA experience to other recruits.

Pinion played for the 17-under Arkansas Hawks this spring and summer. With the increased talent on the Hawks, he was able to help spread the ball around.

“I really got to be more of an off-ball kind of guy,” he said. “I got to pass to my teammates.”

He’s focused on getting better for his high school season and for when he gets to Fayetteville.

“I still have to get a lot stronger and a lot faster horizontally moving side-to-side, staying in front of all the quicker guys in the SEC,” Pinion said.

Playing basketball at a high level demands working out and playing on a nearly year-round basis without much downtime.

“You have to make sure you get all the rest you can,” Pinion said. “You don’t have a lot of days to rest. You really have to recover, ice, do all the things. Stretch.”