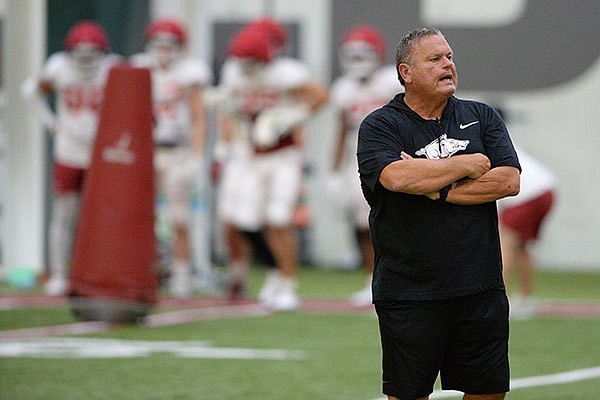 FAYETTEVILLE — Coach Sam Pittman was enthusiastic about what he saw in training camp practice No. 6 on Thursday with the University of Arkansas wrapping up its first week of drills.

For starters, the players coped well with blazing heat that touched into the high 90s with the heat index reaching 103, and beyond that, they made plays, transitioned well on and off the field and appeared to avoid any significant injuries.

“I tell you what, in my opinion it was the best practice we’ve had this camp,” Pittman said. “I don’t even want to say they fought through the heat because you didn’t even notice they were struggling through it. We got a lot done.”

Pittman said the team conducted a lot of red-zone, third-down work and goal line and two-point play scenarios without tackling to the ground, but “thud” work, where defenders make contact with ball carriers but stay on their feet.

“We did a lot of specifics today, and they did a wonderful job of it,” Pittman said. “Started out with a pocket pass protection drill where the defense got after the offense.

Pittman kept it pretty general when talking about who excelled.

“I think the team looked good,” he said. “In other words, we ran to the ball, we practiced hard, we stayed up in third and 1, we took care of each other.”

Pittman said there might have been a couple of twisted ankles “but nothing too big,” and that there weren’t glaring mistakes outside of the pass protection.

“I feel like it was high tempo, good pace from everybody on the offense and the defense out there,” senior receiver Tyson Morris said. “Coach Pittman agreed. He felt we had a good practice, first day in pads and stuff like that. Real physical.”

Said nickel back Greg Brooks Jr., “I felt like we did good since it was so hot. First game is going to be just like that. So I feel like we adjusted really well and came out there and practiced hard.”

Tight end Hudson Henry was back at work on Thursday after receiving permission to miss Wednesday to attend to a personal matter.

Taurean Carter, who worked his way into first-team reps during spring ball, took first-team work at tackle, with ends Dorian Gerald and Zach Williams in a three-man front during the open viewing portion. The second unit up front was all transfers, with ends Markell Utsey and Tre Williams flanking 6-6, 320-pound John Ridgeway.

Trelon Smith caught a pass down a seam from KJ Jefferson for a gain of about 15 yards. Josh Oglesby and Rocket Sanders both had strong runs between the tackles.

Chris Harris, a freshman from Dumas, caught a pass over the middle from freshman Lucas Coley for a 15-yard gain in the Walker Pavilion. Coley also ran for about 10 yards on a keeper.

Linebacker Levi Draper, who had moved to tight end early this week, suffered a recurrence of a shoulder injury that has plagued his career and is taking a medical hardship.

“His shoulder went out,” Sam Pittman said. “He has, with my blessing … I talked to him about it, and he has medical redshirted. So, he’s done.”

Pittman said he called Draper in to discuss the situation because Draper, a transfer from Oklahoma, has had three surgeries on his shoulder, including two last year, and re-injured it on Sunday, the first day he was at tight end.

A player who takes a medical hardship will continue to receive his scholarship money, but the school can apply his athletic scholarship to another player.

Freshman tight end Erin Outley has not been involved in camp practices yet as he continues to rehab from a knee injury.

Brooks, a junior nickel back, returned punts at Harvey (La.) West Jefferson High School but has yet to do it for the Razorbacks.

“I’d like to do it a lot, because I used to do it in high school and it’s fun,” Brooks said. “It’s going really well. I’m getting back adjusted to it. I thought about it when I first came here, but then I broke my thumb, so just getting back in the flow of it.”

Stephens figures to be a top candidate on kickoff returns.

Wideout Tyson Morris was asked who scored touchdowns or made big plays during Thursday’s team periods, which were mostly closed to the media.

“I mean, who do you think comes to mind?” Morris asked back.

When a reporter said perhaps Morris himself and Treylon Burks, he responded, “OK then. Burks, obviously he’s going to show those flashes out there on the field. He’s a big, physical, fast guy.

Cornerback Greg Brooks Jr., said fellow nickel back Trent Gordon had a good first day in pads, including a near pick.

Jackson, a freshman wideout, has been singled out for good work in camp, which included what looked to be an imminent touchdown pass on Thursday. The UA football program’s Twitter account sent out a few pictures and one of them included Jackson jumping very high and in position to haul in a scoring pass against defensive back Jon Conley.

Coach Sam Pittman speculated the three transfer defensive linemen — Markell Utsey and Tre Williams from Missouri and John Ridgeway from Illinois State — are going to be contributors and that all three are in the top rotations right now.

Sophomore corner Devin Bush, who has been working with the third-team defense most of camp, got second-team work on Thursday.

Coach Sam Pittman said the coaches decided to move Bush up the depth chart after meeting on Wednesday, a non-practice day, to go over the depth chart for Saturday’s scrimmage.

“His name came up a lot, so I’m going, ‘Well, if it comes up that much, why don’t we just put him with the twos and see how he is against a little bit better competition?’ ” Pittman said. “That’s what happened.”

Sam Pittman said Thursday he’s not yet ready to determine which walk-ons will receive scholarships.

“I’ll probably wait another week or two,” Pittman said. “The thing about that is you want to make sure … because if I had it my way, I’d give them all a scholarship.

“If I do give somebody a scholarship, it’ll retro back to whatever they paid [for the fall semester] they’ll get back, and then they’ll get their scholarship.

Freshman Cam Little is having a good camp, but Sam Pittman hasn’t named him as the No. 1 kicker.

“Well, he’s kicking it really well,” Pittman said when asked if Little has won the job. “I don’t know what you call winning. I mean, he’s been with the ones every time we go out there. So I’d say he’s doing pretty good.”

Six Razorbacks have been listed by the Senior Bowl as potential invitees to the all-star game.

The Senior Bowl, which attracts the greatest concentration of NFL scouts and team personnel, serves as one of the first steps in the NFL Draft evaluation process. This season’s game will be held Feb. 5, 2022 in Mobile, Ala., and it will be broadcast on the NFL Network.