33 seasons in, Shirey a constant for Razorbacks 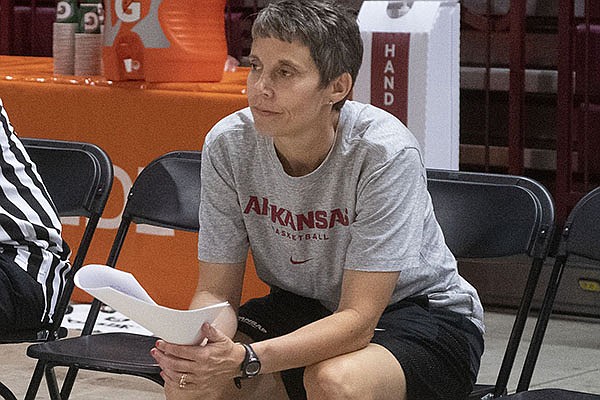 FAYETTEVILLE — Her job titles have changed over the years, but Amber Shirey remains a constant for University of Arkansas women’s basketball.

She called it a dream come true to don the Razorback jersey as a freshman in the fall of 1988 coming from Newark, a small rural town in northeast Arkansas. Coming to grips with beginning her 33rd year as part of the program in Fayetteville is almost unfathomable.

“Time just goes by so fast,” said Shirey, a standout point guard who transitioned into the coaching ranks and has become an invaluable resource over the years.

She was a stabilizing force on the court from 1988-92, starting a record 87 consecutive games. She finished with more than 1,200 points and finished as the career leader in assists with 537. Both Amy Wright and Calli Berna came later and bumped her to No. 3 on the all-time list.

Shirey remains atop the career list in free-throw percentage (84.7) and three-point percentage (41.6).

Shirey At a Glance

NOTABLE Has worn many different hats as part of the coaching staff after the end of her playing career at Arkansas . … Served as an assistant coach (1993-2007, 2012-14) and as the team’s director of operations (2007-12, 2014-present). … Started a school-record 87 consecutive games for the Razorbacks. … Scored 1,209 points in her career. … Finished as the career assists leader and currently ranks third all-time. … Earned All-Southwestern Conference honors twice. … Named MVP of the 1991 Southwest Conference Tournament. … Holds Arkansas career records for free-throw percentage (.847) and three-point percentage (.416).

She’s also worn a variety of hats during her coaching career, from graduate assistant to restricted earnings coach to assistant coach, which included myriad duties on and off the court. Her title now is director of basketball operations, but that doesn’t come close to describing her contribution to the program, Arkansas Coach Mike Neighbors said.

“She does things that head coaches do. She does things that top assistants do,” Neighbors said. “Her title doesn’t do justice to her responsibilities. Her institutional knowledge is just incredible. I mean, if she leaves tomorrow, we’re in trouble.”

Neighbors served as former Arkansas coach Gary Blair’s director of basketball operations years ago, but he acknowledged his responsibilities were quite different.

“I got Gary’s Diet Coke and I drove him places,” Neighbors said. “But I wanted her to be heavily involved in the decision-making process for what we wanted to do.”

Her ability to remain through six different head coaching changes over 32 years in Fayetteville speaks to Shirey’s character, Neighbors said. The Razorbacks have gone 614-397 during her time on campus.

“She has a good relationship with every single person she’s ever worked with,” Neighbors said. “It’s hard to be in a college athletic department more than 12 or 15 years and still have people that are pulling your direction, and she’s got everybody pulling in her direction.

“I’m telling you, it’s rare. The word I use is institutional knowledge and not just for women’s basketball. She’s been here since she was a 17-year-old freshman. That’s irreplaceable knowledge, especially for somebody like me who thrives on information.”

Shirey’s humble demeanor and strong work ethic are two more things that have remained constant over the years. She’s just thankful for the opportunity.

“I’ve been fortunate to be able to stay in one spot and learn under different people,” she said. “I kinda say maybe I’m like the chameleon. I try to adapt to whatever comes along.”

Blair tried to get Shirey to go with him to Texas A&M when he left for College Station in 2003, but she remained in Fayetteville.

“I kept thinking she would eventually leave and go to a UCA or a UA-Fort Smith,” Blair said. “But she loves the state of Arkansas and what’s wrong with staying at your alma mater and make it a better place? That’s what she’s done.”

Blair got to see the then-Amber Nicholas, a two-time All-Southwest Conference selection, as an adversary when the Razorbacks knocked off his Stephen F. Austin team to advance to the NCAA Elite Eight before he came to Arkansas.

“She had a quiet leadership style and just had a calmness about her,” Blair said. “When she played, she was like Mary Tyler Moore that everybody in Arkansas knew and loved.”

That’s translated to her coaching career as well, Blair said.

“Just her steadiness. She could talk to players and help them make good decisions,” Blair said. “She was a great teacher on the practice court as well.”

Blair pointed out that all of those coaches at Arkansas, himself included, might not have done everything right. But they all decided to keep Shirey, which was has turned out to be a pretty good call.

“It’s pretty incredible that we’ve all been smart enough to realize that Amber is bigger than all of us,” Blair said. “Sometimes coaches come in and think they’ve invented the light bulb or something. I think all of us were smart enough to see Amber was a big part of it.”

Blair (Savage) Lansden was Shirey’s teammate at Arkansas, and they lived together for five years. Even then Shirey showed extreme character, kindness and discipline, said Lansden, who spent some time in college coaching before moving back to Fayetteville with her family.

“I didn’t have a car my first couple years there, and she took me where ever I needed to go,” Lansden said. “The hard thing about being her roommate, she never drank soda. She didn’t eat a candy bar or junk food. I was like, ‘Oh my gosh! Don’t you want one?’

“She was just that disciplined in every aspect of her life, and that reflected how she was as a player, too. Whatever you needed her to do for us to be successful, that’s what she was willing to do. That carries over in her life and her career. She’s just built that way. It’s truly unique.”

Shirey has been a part of lots of big moments in program history. She was on the floor when Arkansas snapped Texas’ 183-game SWC conference winning streak, and she was named the MVP of the Southwest Conference Tournament. She said the Razorbacks’ wins last season over Baylor and UConn qualify as memorable moments, too.

She admitted there were more opportunities than just the one with Blair to move on, but career priorities took a back seat when her children entered the picture. So she and her family have remained in Northwest Arkansas.

“You probably would have to move who knows where, and I just didn’t want to do all that,” Shirey said.

Shirey said her chances of being a head coach at the collegiate level are likely gone, but the possibility remains elsewhere.

“I’m not gonna rule out high school,” Shirey said. “For that matter, even junior high. I got to the point I really enjoy working with the younger ones, teaching the fundamentals with our camps and stuff. I wouldn’t rule that out at all.”

For now, she will provide stability and consistency to Arkansas women’s basketball.