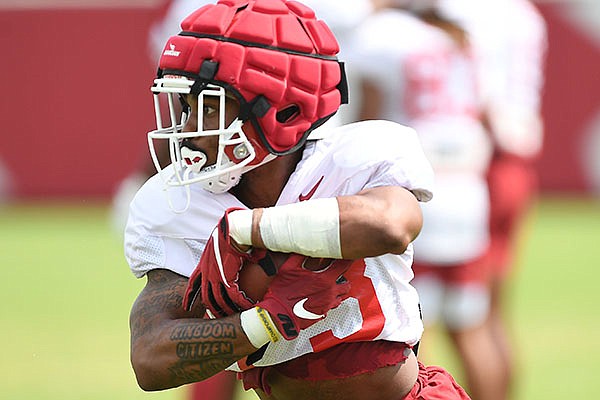 FAYETTEVILLE — The University of Arkansas has a history of athletes competing in football and track and field going back more than 90 years.

Wear Schoonover, a receiver from Pocahontas who was the Razorbacks’ first All-American football player in 1929, also lettered in track in 1930.

Running back Josh Oglesby, a redshirt junior from Katy, Texas, hopes to become the latest Razorback to excel in football and track.

Oglesby earned All-American honors in 2019 as a sprinter on Arkansas’ 400-meter relay team that finished fourth at the NCAA Outdoor Championships.

This fall Oglesby is set to play in his first football game as a Razorback after redshirting in 2020 because of a foot injury he suffered in preseason camp.

Oglesby also will continue to run for the track team, as he did outdoors after going through spring practice.

“It’s not easy, but it’s something I wanted to take on,” Oglesby said of competing in two sports at an SEC school. “I knew it was something not a lot of guys can do, and I felt like it would give me an advantage on the football field. So I embraced it.”

Oglesby, 5-8 and 175 pounds, began his college athletic career playing football at Texas A&M-Kingsville — an NCAA Division II team — after combining to rush for 1,709 yards and 21 touchdowns as a junior and senior at Katy High School.

After playing in four games for Texas A&M-Kingsville in 2018 and rushing 29 times for 119 yards, Oglesby contacted Arkansas’ track coaches, who had recruited him when he ran 10.42 seconds to finish third in the 100 meters at the Texas Class 6A state championships. It was the 16th-fastest time nationally.

“Josh wanted to know if we were still interested in having him run for us,” said Chris Bucknam, head coach of the Arkansas men’s track and field and cross country programs. “Of course we were.”

Oglesby transferred to Arkansas in January 2019 and became an immediate contributor for the track team.

But he still wanted to play football.

“Football was always my first love,” Oglesby said. “So when I was on the track team, I already had it in my mind that I wanted to come over to football.”

A longtime friendship between Oglesby’s father, John, and Will Kelly, the father of former Arkansas defensive lineman Xavier Kelly, helped Josh Oglesby get the attention of the football coaches.

The fathers went to high school together in Detroit and were football teammates. Last year they met with the Arkansas football coaches on Josh’s behalf after Xavier Kelly transferred from Clemson.

“My dad knowing Xavier Kelly’s dad helped out,” Oglesby said. “Gave me a little extra edge. And the rest is history.”

Arkansas has a long history of athletes who have excelled in football and track and field.

Junior running back Josh Oglesby, an All-American sprinter for Arkansas’ 400-meter relay team, hopes to add his name to the list when he plays football for the Razorbacks this season.

Here are some of the notable athletes who lettered for Arkansas in football and track and field:

ANALYSIS Smith is the unquestioned No. 1 back and leader of the group after he emerged as a go-to player early last season when Boyd was injured. Oglesby, who came to Arkansas as a track and field sprinter in 2019 and joined the football team last year, looks ready to help after he missed the 2020 season because of a foot injury. Green has been the most impressive freshman in preseason practices, but Hunt and Sanders also were heavily recruited. Hammonds, who has shown big-play ability at times in the past, also is getting work with the receivers. Johnson got some snaps at running back in Saturday’s scrimmage, but Coach Sam Pittman said he’s a tight end.

Arkansas running backs coach Jimmy Smith said he naturally was interested in a sprinter already on the UA campus. After watching game tape of Oglesby playing football, Smith was impressed.

“I watched his film and he was running into people,” Smith said. “He wasn’t scared.

“I couldn’t see his exact size, but I knew he was tough. He wasn’t big. But once I saw him and we got him out there, I could tell he’d be a good football player.”

Bucknam said he appreciated that Sam Pittman, the Razorbacks’ head coach, sought his permission for Oglesby to play football.

“I have a lot of trust in Sam, we have a great relationship,” Bucknam said. “Sam told me that he didn’t want to interfere with what Josh was doing with the track team if we thought him playing football would hurt that, and I said, ‘Dude, let’s let him play football. Let’s see what he’s got.’

“I think Josh can help our football team just like he helped our track team.”

Bucknam said Oglesby and his father also made sure the track coaches didn’t have an issue with him playing football.

“Here’s the thing that I respect so much about Josh and his dad,” Bucknam said. “His dad said, ‘If you don’t want Josh to play football, he won’t play football, because you and the track program saved him from Kingsville, where he was not happy.’

“Josh said, ‘Coach, you gave me my first chance to be an SEC athlete, and if you don’t want me to do both sports, I’ll stay committed to track only.’

Sadly, John Oglesby won’t get the opportunity to see his son play football at Arkansas. He died of a heart attack in June.

“It was shocking and heartbreaking,” Bucknam said. “His dad was an unbelievable person.

“We’re all really rooting for Josh on the football field to have a great season, because football was taken away from him last year. Then he had this terrible family tragedy, losing his dad. If there’s anybody you want to have a freakin’ breakout year, it’s Josh, after all he’s had to go through.”

Oglesby, whose personal-best in the 100 is 10.38, is competing with freshmen AJ Green, Rocket Sanders and Javion Hunt for the No. 2 running back spot behind returning junior starter Trelon Smith.

“He’s fast,” junior nickel back Greg Brooks said of Oglesby. “I feel like he gets on that corner, ain’t nobody going to catch him.

“He’s definitely come a long way since last year. You can see the progression towards being a real running back in the SEC.”

“I feel like he’s going to make a lot of noise this year,” Smith said. “He’s got a lot of speed, and I feel we need that in the backfield.”

Jimmy Smith said Oglesby has quickness to go along with his speed.

“What’s amazing about him is most fast guys are not as quick as him,” Smith said. “He’s fast and quick, which is a good combination because for me, fast is like a bonus.

“You can’t just be a guy who can run fast straight ahead. Have to have the quickness and a burst.”

Oglesby said it’s highly competitive to see who will get the work at running back behind Smith.

“We all want to be on the field, so I just come into work every day and put my head down and do what I can do,” said Oglesby, who also is getting work as a kickoff returner. “Any way that I can help the team, that’s what I’m going to do.

Bucknam said it’s been a joy to coach Oglesby.

“He’s a great competitor, a really good sprinter, and I think he’s a hell of a football player, too,” Bucknam said. “That’s why we wanted to help give him another chance at football.”