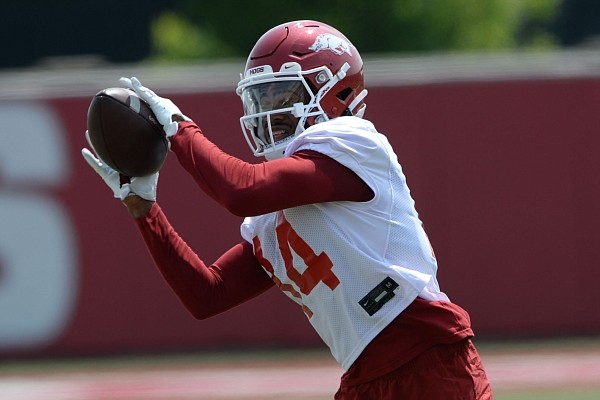 FAYETTEVILLE — Many players on Arkansas’ current roster were in elementary school or junior high school the last time the Razorbacks returned a punt for a touchdown.

That came courtesy of Joe Adams in the Cotton Bowl against Kansas State in January 2012. Arkansas has been in a long, frustrating drought in that regard since.

Wide receiver Treylon Burks provided numerous sparks in the return game as a freshman and landed on an All-SEC team as a return specialist, but he never found the end zone. Then, in 2020, he was demoted from such duties after costing the Razorbacks field position by letting kicks land and roll.

His replacement did not reverse the team’s fortunes. In Year 1 under special teams coordinator Scott Fountain, Arkansas was one of the least productive punt return units in the country.

But one thing has become clear through nine days of preseason practice: The Razorbacks will have new blood at punt return.

“I come from a background as a special teams guy that I always try to find a really good player to do that. I think it's a game changer,” Fountain said Monday. “I feel like punt return is always effort up front. I feel like we're getting that from our guys, we just have to have the right guy on the back end.”

Fountain said Brooks, a projected starter at nickel back, approached him this summer about serving in the new role.

“A lot of kids are not always that way. I asked how many plays he's playing in a game and he said about 70,” Fountain added. “We can't (put him on all four units). I told him that. But he also enlightened me and said, 'Coach, I can catch the ball. I want to return punts.'

“We started working this summer and it's been a good pickup for us. He's a guy that can do that."

Parodi last season led the team with three returns for 14 yards. He had a long of 15 yards.

Brooks, who returned an interception 69 yards for a score at Mississippi State, could bring needed speed and elusiveness to the position.

“They might not field it was well as the other guy, but they're going to be a difference-maker when they touch the football. That's what we're trying to find in that position.”

Stephens returned four punts for touchdowns as a junior at Oklahoma City Marshall, including an 85-yarder against Oklahoma City Mount St. Mary. Stephens may be a natural in the return game in college, according to his position coach.

“The way he runs, he catches the ball well,” wide receiver coach Kenny Guiton said. “He’s a good-sized kid who can really fly. He can really fly. We're excited about that.

“You can always use a guy that can fly, so I can see him helping us out.”