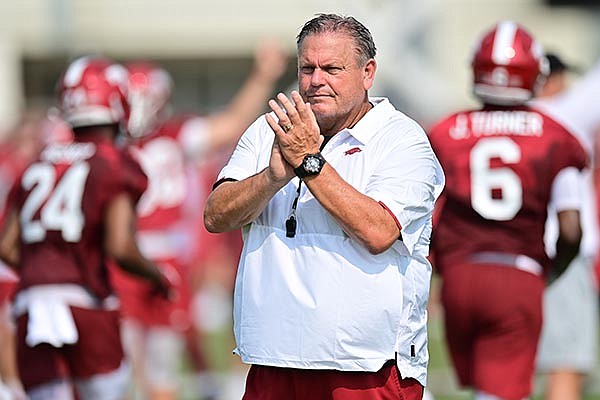 Arkansas also plays No. 21 Texas, which along with No. 2 Oklahoma has accepted an invitation to move from the Big 12 to the SEC no later than the 2025 season and possibly as early as 2022.

“On our football schedule we are the defending national champions of the hardest football schedule in college,” Arkansas Coach Sam Pittman said at SEC Media Days last month. “I look towards next year, and I think we’re going to three-peat in that area next year.

“However, we’re the University of Arkansas, in the [SEC] West, exactly where we belong, and we’re excited about those challenges.”

Alabama is the defending national champion after going 13-0 last season, including 11-0 against SEC teams with victories over Notre Dame and Clemson in the College Football Playoff.

Six SEC teams are ranked in the AP poll, including No. 13 Florida.

Razorbacks senior linebacker Grant Morgan said last week that he hadn’t seen the coaches poll, but that he expected several Arkansas opponents to be ranked.

“That doesn’t shock me at all,” Morgan said. “We’re the No. 1 hardest schedule, so I figured at least some of them would be on there.

“I don’t think we really go into the season looking at anyone’s ranking. I know it’s crazy that a couple years ago you played the No. 1 ranked team three times throughout the year or whatever, but we don’t go into games looking at that or caring about that.

Arkansas played Alabama and LSU three weeks apart in 2019 when the Crimson Tide and Tigers were each ranked No. 1.

The Razorbacks played four ranked teams in 2019 and six last season. They played eight ranked teams during the regular season in 2014 and eight in 2016, including No. 24 Virginia Tech in the Belk Bowl.

Arkansas hasn’t played fewer than four ranked opponents in a season since 2012, when they faced three.

“We play in the SEC,” Arkansas senior linebacker Hayden Henry said. “Odds are a lot of the teams that we play are going to be ranked.

“Every week is just a nameless, faceless opponent to us.”