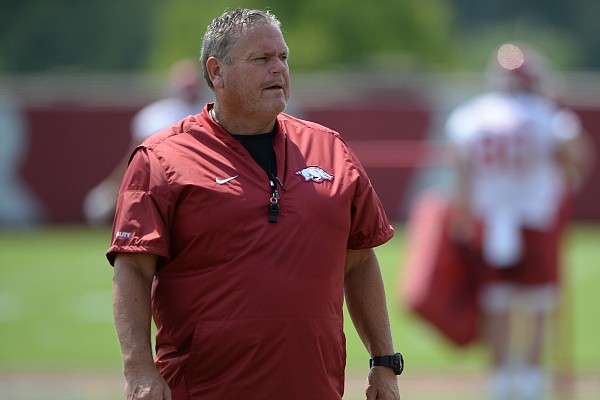 FAYETTEVILLE — Sam Pittman knows what the University of Arkansas football program must do and how to get there if it is to cycle toward the top of the SEC West.

The Razorbacks have to win battles on the recruiting trail.

To do that, Pittman has tried to assemble a group of like-minded coaches who live and breathe recruiting. The second-year Arkansas coach has skewed younger with his recent hires in an attempt to attack the trail.

Every coaching change Pittman made after his first season, the new hire was younger than the last with just one exception: new tight ends Coach Dowell Loggains, who is 40, replacing 32-year-old Cody Kennedy. But Kennedy, who took over the offensive line from Brad Davis, was younger than both Davis and his predecessor with the tight ends, Jon Cooper, when he was hired over the winter.

If there is a common trait among what Pittman sees as the ideal assistant it is this: They need to be great communicators. And not just salesmen who relate well to prospects and parents and kinfolk in an effort to get them to campus.

The way Pittman sees it, they need to connect with players and family in a deeper way and maintain that harmony when adversity hits, when success comes their way, when other players are added at their position. Even after their playing days are over.

Pittman has talked repeatedly about communication being a top skill required of him and all of his assistants. And it’s not just the words that are spoken, it’s how they’re used.

Pittman addressed that very topic Saturday when talking about Loggains making the switch from a lengthy stint coaching in the NFL to the college game at his alma mater.

“It’s about how you treat them, what your knowledge is, how you talk to them, do you know what you’re talking about,” Pittman said. “If you do those things, I think you can coach about any level.

“You lose trust and you lose respect from your players when you talk to them in the wrong kind of way and when you don’t know what you’re talking about. If you’ll talk to them and teach them, Dowell’s really good at that.”

Running backs Coach Jimmy Smith said the attraction to Arkansas when he came over from Georgia State two years ago was Pittman and his ability to recruit recruiters.

“It’s simple,” Smith said. “Great guy. When I first met him, I could tell he was a great guy. It’s very important to me to be able to go out and recruit kids and be able to say the head coach is going to take care of you and he cares about the kids coming in and not have to weave my way around it. I can be honest in saying that.

Second-year cornerbacks Coach Sam Carter was connected with Barry Odom at Missouri, and Odom has discussed his relationship with Pittman as a huge reason he jumped on board with the Razorbacks in December 2019.

“Being on this staff with Coach Pittman, he always talks about recruiting,” Carter said. “Recruiting is something you do every day.

“As soon as I leave here, I’m going to walk across, text some recruits, get in there and watch tape. Tonight, text them because you can’t call them. I think you’ve just got to outwork people.”

Loggains’ skill as a recruiter and an advocate for Arkansas football as a former Razorback already has been on display.

The Razorbacks have commitments from a pair of highly regarded tight ends in the 2023 class: 6-5 Shamar Easter from Ashdown and 6-6 Jaden Hamm from Eudora, Kan. Kennedy also played a role in recruiting Easter.

Smith, who had been a high school head coach in Georgia before joining the college ranks, said he recruits with an approach that he can’t hold back.

“I am a little different with my recruiting style,” he said. “I’m so honest and straightforward with kids. I think that’s something, I almost fell into it, because I didn’t know the recruiting rules or whatever. That’s just how I did it, and it was effective.

“I think I can relate to anybody. So I just enjoy the process of being able to tell a kid he can come to college and get an education and be successful in life. It’s just fun for me to be able to help somebody do that.”

Smith has been a steady recruiter for the Hogs, and he landed AJ Green with this year’s class and has Rashod Dubinion committed in the next.

Linebackers Coach Michael Scherer, at 27 the youngest coach on the Arkansas staff, is developing his recruiting style.

“As I’m starting to learn this recruiting deal, it’s trying to find not only good football players but good people,” Scherer said. “Those are the … kids who seem to have success. Even when I was playing, you look at the guys I played with who had success, they’re all smart, good, genuine people. And so that’s what I’m looking for.

“Once you form this relationship with a high school kid … it just becomes genuine. I don’t know anything else. They become part of my life, I become part of theirs.”

Scherer said he’s seen where current members of the team wind up helping recruit by what they say to prospects on visits.

“Getting them around our players, and our players know that, all of our staff has proved that we’ll do anything for them,” he said. “So when they relay that message to a high school kid and it’s not coming from me, it’s easy to believe because it’s just the truth. That’s kind of how recruiting’s going.”

Scherer’s been involved in commitments by linebackers Jordan Crook and Mani Powell.

“We’re one of the top classes in the country, and I think it’s going to stay that way as long as we keep rolling,” he said. “Especially I think after we start this season off, we might have people trying to jump on the train. I’m excited about that.”

Guiton has attracted Clarendon wideout Quincey McAdoo as a 2022 commitment.

Kennedy has worked on several offensive line commitments, including in-state four stars E’Marion Harris and Andrew Chamblee, and chipped in on tight end Tyrus Washington as well as Easter.

The Razorbacks currently rank No. 19 overall and No. 7 in the SEC in the 247Sports composite rankings for the 2022 signing class.