Hamm gets ball rolling on 2023 class 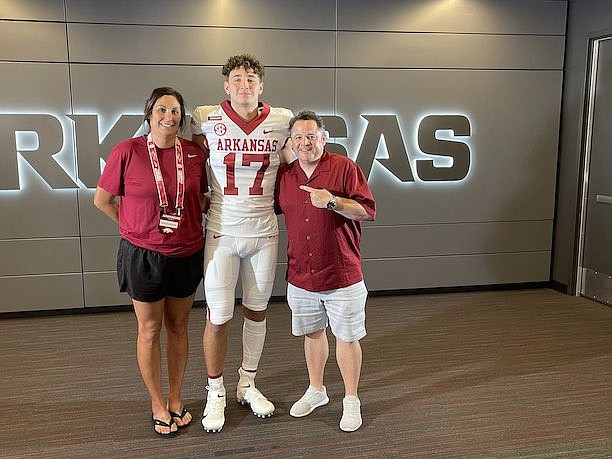 Not that Hayden has a favorite school for the 2023 prospect, but because he is secure in the fact that Razorback head coach Sam Pittman and tight ends coach Dowell Loggains will take care of Hamm.

“Coach Loggains is pretty awesome and I can tell why Jaden wants to go there and why he has gotten three or so commits already,” Hayden said. “He is exciting, he is respectful and you can tell he cares about kids.

“Coach Pittman, he is just a dude. He is a man of his word. He really cares about kids and does things the right way. As a high school coach, you want your kids to go to places that are that way and that’s clearly how Arkansas is.”

Hamm was one of two 2023 tight ends that committed to the Razorbacks last week with Ashdown’s Shamar Easter (6-5, 225) becoming the first pledge of that class when he jumped in on Friday.

They join 2022 Arkansas commit Tyrus Washington of Leesburg (Ga.) Lee County as tight ends landed by Loggains since his arrival this spring.

They are viewed as great athletes as they are also basketball and track standouts.

“He is very gifted genetically,” Hayden said of Hamm. “He is one that we had to play early, but he has God-given talent athletically, is tall and can jump very high.”

A difference is Easter caught 22 passes for 400 yards and seven touchdowns while Eudora puts the ball in the air infrequently.

“We don’t throw the ball very much,” Hayden said. “We run the flex bone and have a really good fullback. We’ll be able to throw a little bit more this year, but we don’t try to force anybody the ball. We just let it happen.

“Seriously it was our first year with the triple option and because of covid, we never really got to the third option…This year we have had the timing and the practice time to be able to do that.”

“Getting all these offers could sometimes get to people’s heads, but I don’t think that is the case with Jaden,” Hayden said. “He just wants to work.

“He is willing to do whatever you ask him to do. He plays any where for us. He’ll play tight end, he’ll play tackle if we wanted him to, he’ll play defensive end, just anything you want him to do.

“I even had a talk with him before the season maybe you get one catch a game, maybe you get zero catches a game. He said, ‘I don’t care. I just want to make the team better in any way I can.’”

Hamm made his biggest impact last season on defense where he had 61 total tackles, including 22 solo stops.

Kansas State was offering him a chance to play on either side of the ball. Oklahoma State and Penn State were recruiting him at defensive end and the other nine schools wanted him as a tight end.

Eudora was 3-7 last season, but expects more wins this season. The Cardinals began practice on Monday, will have a scrimmage in two weeks and open their season on Sept. 3 by hosting Baldwin.

“Last year we were very young,” Hayden said. “We were very young and everybody else had older teams. We dropped four games by one score or less. It was just a learning experience.

“These kids are just ready to focus on getting better every game. They have the tools to make a deep run, they have the mindset and know the work it takes. The hardest thing for them is just being patient.”